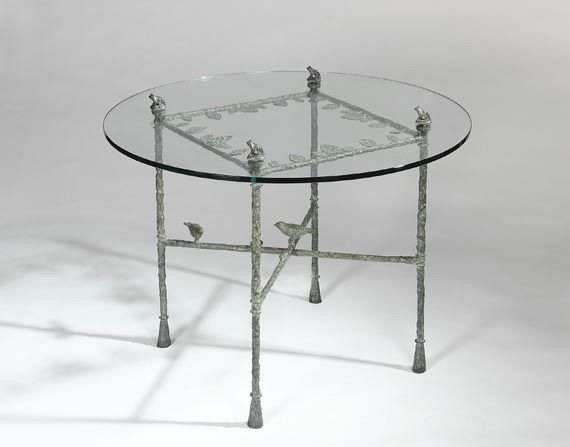 Both a sculptor and a furniture designer, Diego Giacometti was initially overshadowed by his brother Alberto, for whom he worked for decades as an indispensable assistant. By the 1930s the Giacometti brothers had begun to collaborate on designing furnishings and appointments for the Paris interior designer Jean-Michel Frank, an activity that was interrupted for a few years by the second world war. From the 1950s Diego Giacometti began to go public with creations of his own. His furniture, lamps and small objects in bronze refer in their delicate open structures and unsmoothed surfaces to Alberto’s work yet are distinctive as a unique linkage of furniture design and animal sculpture. Our two table objects are so appealing because they linke classic harmonious basic forms with a rustic surface and comical, realistic animal figures that seem to have sprung from a mythic world. [NB].

In good condition. With few tiny traces of oxidation in places.