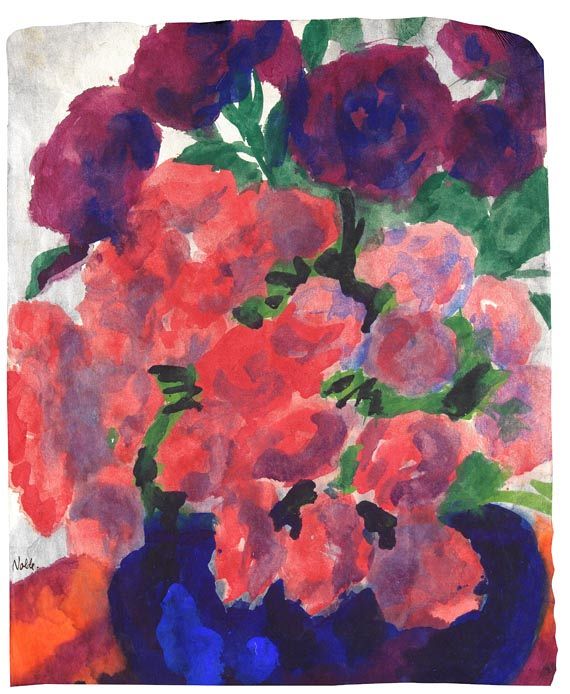 This work is accompanied by a photo expertise from Prof. Dr. Manfred Reuther, Foundation Seebüll Ada and Emil Nolde, from 8 May 2009. The work is registered there.

Emil Hansen was born on the German-Danish border in 1867. He would later used the name of his birthplace as his nom d’artiste. After serving an apprenticeship as a furniture designer and wood-carver in Flensburg from 1884 to 1888, he worked for furniture factories in Munich, Karlsruhe and Berlin. In 1892 Nolde was hired as a teacher of commercial drawing at the Gewerbemuseum in St. Gallen, Switzerland, where he stayed until 1898. There he at first painted landscapes in watercolor and did drawings of the mountain peasants, making a name for himself with small colored drawings of the Swiss mountains. Deciding to become a painter, Nolde finally went to Munich but the Munich Art Academy, at that time headed by Franz von Stuck did not admit him. Nolde studied instead at the private painting school run by Adolf Hölzel in Dachau and at the Académie Julian in Paris from 1899. He rented a studio in Copenhagen in 1900 and moved to the island of Alsen in 1903. A preoccupation with the Neo-Impressionists Vincent van Gogh, Edvard Munch and James Ensor enabled Nolde to abandon his initial Romantic naturalism for a style that by 1905 was distinctively his own, in which color plays and essential role; he began painting flower pictures in intensely vibrant colors.
Nolde was not a flower painter as such yet this motif occupies an important place in his œuvre. Although he attempted in his early flower pictures, which he painted in the garden of his parents’ house, to capture a seemingly infinite number of pansies or tulips in oil on canvas, watercolor was his medium of choice in his later works featuring representations of flowers. Nolde’s fondness for flowers went back to his childhood and would accompany him throughout his career. As in our example, it was the purity and freedom of color as well as the linkage of beauty and transience that continued to captivate the artist. “The blooming colors of flowers and the purity of those colors, I love them. I love flowers with their destiny: growing, flowering, glowing vibrantly, making us happy, bending over, fading, ending discarded in a pit. Our human existence is not always so consistent and so beautiful [...]” (quoted in Martin Urban: Emil Nolde. Blumen und Tiere. Aquarelle und Zeichnungen, Cologne 1965, pp. 7-8).
Proscribed as an artist during the war years and, moreover, forbidden by the National Socialist regime to work, Nolde produced “unpainted pictures” from 1938 at Seebüll, hundreds of watercolors in small formats, which he made use of when he was able to return to oils after 1945. He dies in his house at Seebüll on 13 April 1956. [JS]. 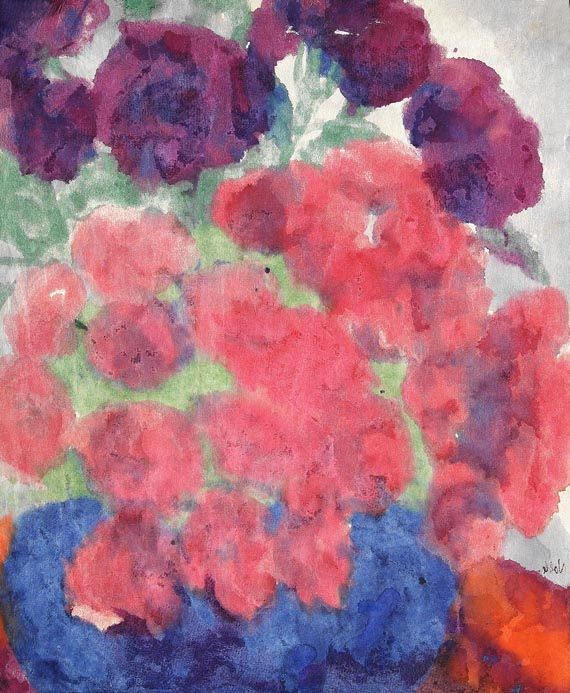 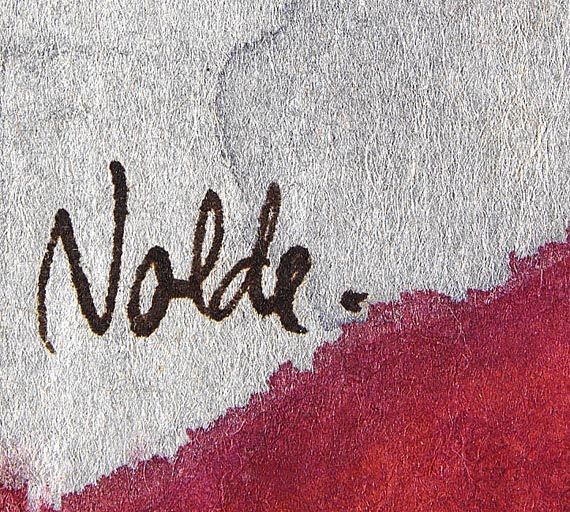