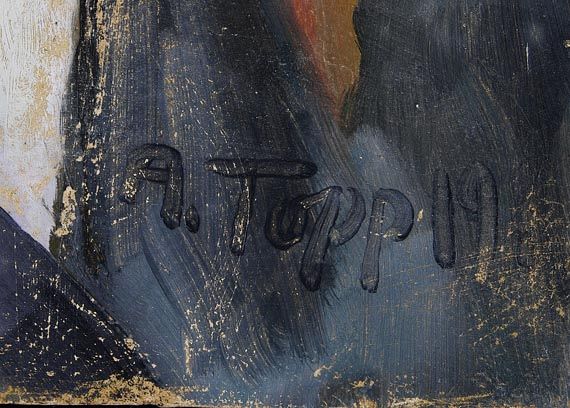 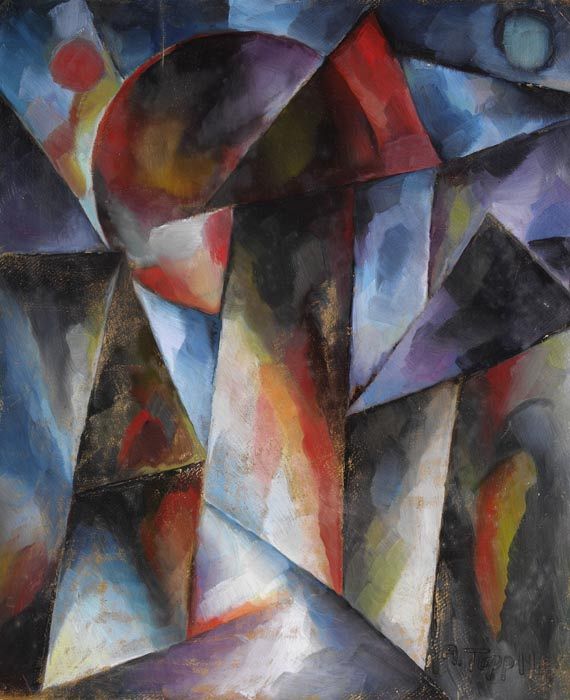 The authenticity of this work has kindly been confirmed in written form on 18 May 2009 by Dr. Rainer Enders, Frankfurt (Oder). It will be included into the reviewed catalogue raisonné under the number 19.Oe.15.

Born in Soest, Westphalia, in 1887, Arnold Topp was friend with his fellow Soest artists Wilhelm Morgner and Eberhard Viegener by 1904. Topp first attended the Soest teachers’ seminary and became a village schoolmaster after finishing his studies. In 1910 Topp attended the Royal Art School in Düsseldorf, where he studied at the seminary for drawing teachers under Lothar von Kunowski before accepting employment as a drawing teacher in Brandenburg on the Havel in 1913. From there Topp kept in touch with the Berlin gallery "Der Sturm", with which he had already established contact. He went to Berlin regularly and became friends with contemporaries, including Bruno Taut and Georg Muche. Topp married in 1914 and his first son was born a year later. His first show was held at "Der Sturm" in December 1915 but by then he had been conscripted. Wounded at Verdun, Topp spent some time in field hospitals before returning to Brandenburg.
Arnold Topp’s abstract works are psychograms of the period in which they were produced. They reveal the influence the Cubists exerted on German Modernism yet still owe a debt to Romanticism in the statement they make of a kind that can only be understood in the German 19th-century tradition. The cool canon of forms in its painterly interpretation in this work permits associations that counteract the cubically constructed composition. The painterly aspects predominate, making the composition glow seductively in an eerie state of suspension. The state of abeyance, a characteristic of that turbulent era, is one of the most appealing aspects of this work Arnold Topp did shortly after the first world war.
Topp showed work at numerous exhibitions throughout Germany as well as the US, the Soviet union, Japan and France until 1929. At least five of his works were included in the notorious “degenerate art” show in 1937. In 1945 he was called up for last-ditch service with the Volkssturm before being transferred to the Wehrmacht. He was reported missing in action after serving on the front during the last year of the war. His wife had to flee the invading Russian forces, leaving the house as well as her husband’s studio and paintings behind. In April 1961 Arnold Topp was declared dead by the Soest County Court. [KD].