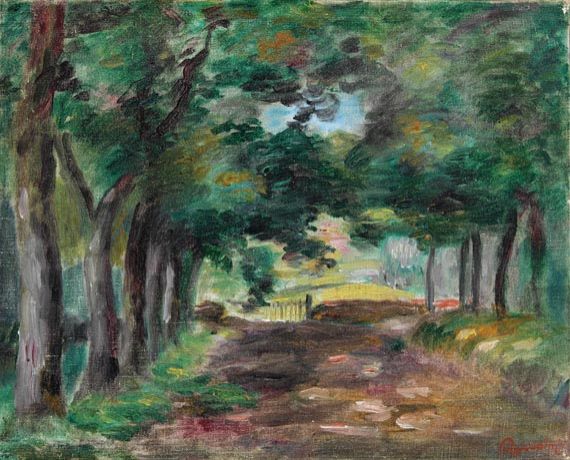 With a certificate of authenticity from the Wildenstein Institute, Paris, from 3 June 2008. This work will be included into the critical catalogue of works Pierre-Auguste Renoir, which is absed on the archive documents of François Daulte, Durand-Ruel, Venturi, Vollard and Wildenstein.

With his vast and varied œuvre comprising paintings, prints, pastels and sculpture, Pierre Auguste Renoir has come to exemplify French Impressionism. The son of a not particularly prosperous tailor, Renoir began his career as a china painter in Paris, where his family had settled in 1854. From 1861 Renoir frequented the studio of the academic painter Charles Gleyre, where he came into contact with Frédéric Bazille, Claude Monet and Alfred Sisley. In 1862 Renoir painted in the forest of Fontainebleau with Monet, where they made the acquaintance of the group of painters known as the Barbizon School. Renoir’s role models were by now Gustave Courbet and Eugène Delacroix. He painted his first pictures in the new Impressionist outdoor plein air style of painting. A co-founder of the artists’ association formed by a group of revolutionary young artists in 1873, Renoir showed work at the Impressionist exhibitions that scandalised the Paris public. The following decade became the heyday of Impressionism and Renoir’s painting was at its zenith since he was committed to that style. Regular sale of his pictures to the art dealer Durand-Ruel enabled Renoir to travel abroad for the first time, to Algeria and Italy in 1881. During the 1880s Renoir worked on consolidating his handling of form and a more closed line in the manner of the late Classicism espoused by Ingres. Later Renoir would return to a lighter, more Impressionist style of painting. After his marriage to Aline Charigot in 1885 and especially after the birth of his sons, Renoir lavished a great deal of time on depicting his own family. Towards 1900, as the artist was at the height of his career and a retrospective at the 1904 Paris Salon d’automne consolidated his reputation, Renoir fell victim to attacks of gout and rheumatism.
The mild climate of Provence induced Renoir to move there for health reasons. Other themes of course now had precedence over his Paris motifs. Apart from many studies of female nudes and flower still lifes, landscapes became increasingly important in Renoir’s work. Provence abounded with avenues of trees that provided welcome shade in the scorching heat of summer and made it possible to spend days outdoors in comfort. Renoir chose one of those shaded forest paths as his motif for our picture, capturing it in the sensitive handling that is the hallmark of his style. Renoir treated trees just as gently as he did his models, rendering them in such a way that all harshness and contrasts were eliminated. The essential quality of the avenue as a provider of refreshing shade is depicted undramatically and even the reflections of light, which were otherwise such a prime concern of the Impressionists’, have been moderated and subordinated to the harmony of the place. The softness of the brushwork, which eschews any approach to draughtsmanship, facilitates the completeness of the statement made in the picture, which is all the more typical of Renoir in that it has no need of universally familiar pictorial elements.
Pierre Auguste Renoir, who always showed nature and mankind from the cheerful idyllic side, died at Cagnes near Nice in 1919. [KD].