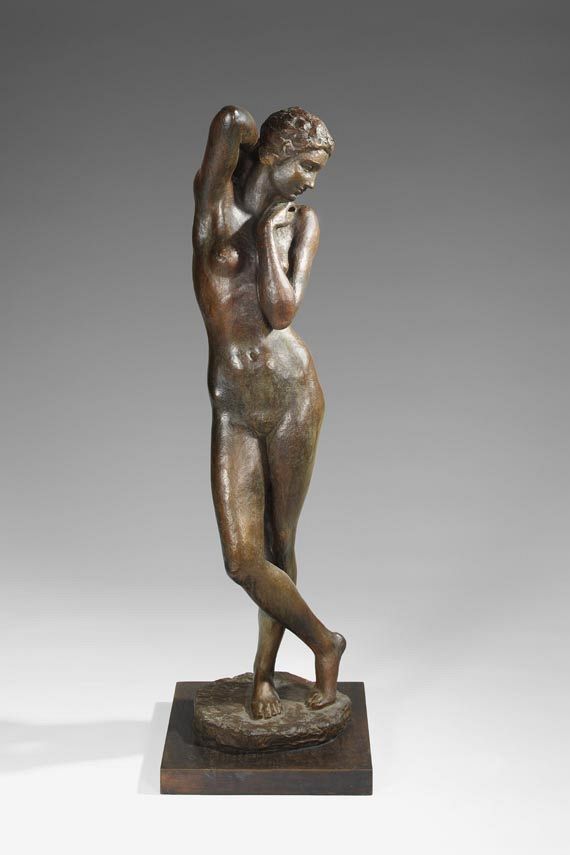 Fritz Klimsch trained at the Königlichen Akademische Hochschule für die bildenden Künste in Berlin in the drawing class taught by the painter Ernst Hancke and in the modelling class with Albert Wolff. He was a pupil of Fritz Schaper’s from 1887 until 1890. While still a student, Klimsch produced important works. As a young sculptor, he was awarded prizes and became well-known. A trip to Paris made Klimsch acquainted with Rodin’s works, which stunned him with their exuberant vitality of form and expression and exerted a lasting influence on his own sculpture. Apart from Rodin, Klimsch viewed Adolf von Hildebrand as the second great influence on his art, supplementing Rodin’s vitality with consolidating tectonics and statics. Klimsch joined forces with Max Liebermann and Walter Leistikow to co-found the Berlin Secession in 1898 and regularly showed work at their exhibitions. Travels in Italy and Greece shaped his style. Thereafter Klimsch was successful with portraiture, monuments and funerary sculpture. He did numerous portraits of distinguished representatives of public and cultural life (including Ludwig Thoma, Lovis Corinth, Max Liebermann, Max Slevogt and Paul von Hindenburg). In 1912 he became a member of the Prussian Academy of Arts and in 1916 a senator of that academy. In 1921 Fritz Klimsch was appointed to a teaching post at the Akademische Hochschule für bildende Künste.
Dominated by intersecting diagonals, this composition is, despite the interlocking limbs, notable for balanced proportion, a quality that is intended as a deliberate contrast with the sensuous allure of the youthful female body. An “elegaic” gesture reminiscent of Art Nouveau harks back to late 19th-century works, in which classical proportions tended to be associated with a decorative approach to gesture. Something of that quality has survived in Fritz Klimsch’s early works. The sculpture he produced in the 1920s, of which our bronze is a prime example, refers, through the suggestion of narrative gesture, to great role models, most notably Rodin, whose dramatic figurations Klimsch has moderated and poured into a new feeling for form.
By 1935 he was head of the master studio there at the time he retired. When the second world war ended, the artist settled in the Black Forest, where he lived a retired life, producing just a few works in small formats. Awarded the Große Bundesverdienstkreuz (Order of Merit of the Federal Republic of Germany) in 1960, Fritz Klimsch died that same year. [KD].

In very good condition. With few tiny traces of colors.