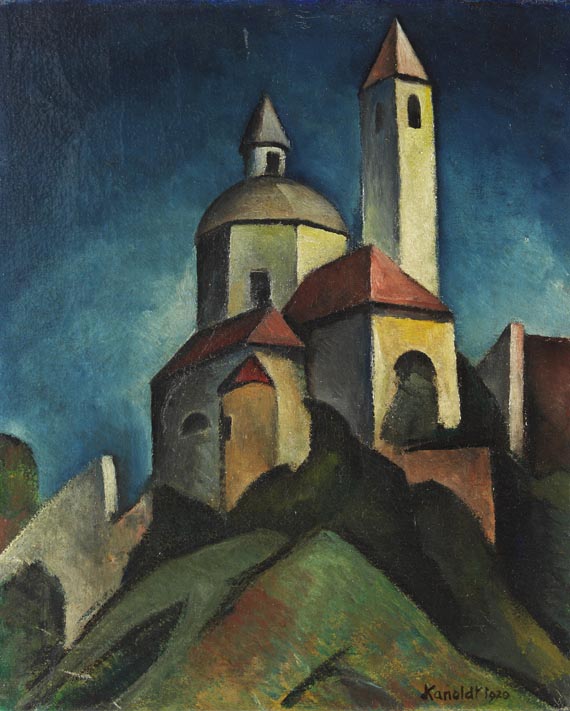 Klosterkapelle von Säben. 1920.
Oil on canvas.
Signed and dated lower right. Additionally signed, dated and inscribed "XXI No. 137" on stretcher. 35 : 29 cm (13,7 : 11,4 in). Kanoldt, oneof the founding members of the Munich New Artists Association in 1909, along with Kandinsky, abets the group's separation in 1911 by rejecting his colleagues' abstract tendencies. Kanoldt sticks to the figurative, which is a decisve prerequisite for the formation of New Objectivity in the 1920s, a fact that helps the artist to find a very clear use of forms. This view of the monastery Säben in South Tyrol presents the complex's Eastern part in its full monumentality in front of the azure summer's sky, despite its small format, due to the especially low viewpoint of the observer. The architecture, reduced to its basic geometric forms and colour surfaces, doing without any interior contures, just as the cloudless sky, is given its spatial and thus figurative effect only by means of the scene's lighting and the transitions of light and shade. [JS]
EXPERTISE: We are grateful to Dr. Michael Koch, editor of Alexander Kanoldt's catalogue raisonné, for his kind help in cataloguing this lot
PROVENIENZ: Collection Franz Friedrich Kästner, Erfurt.
Private collection South Germany.

According to the kind information from Dr. Michael Koch, the picture, also called "Kapelle" (Chapel) and "Kapelle in Südtirol" (Chapel in South Tyrol) in the artist's papers, depicts the chapel of the monastery Säben near Klausen in South Tyrol
Upper left corner minimally bumped and with slight colour flaking. With faint craquelé in places, as well as with minimal traces of rubbings and small isolated retouched spots.