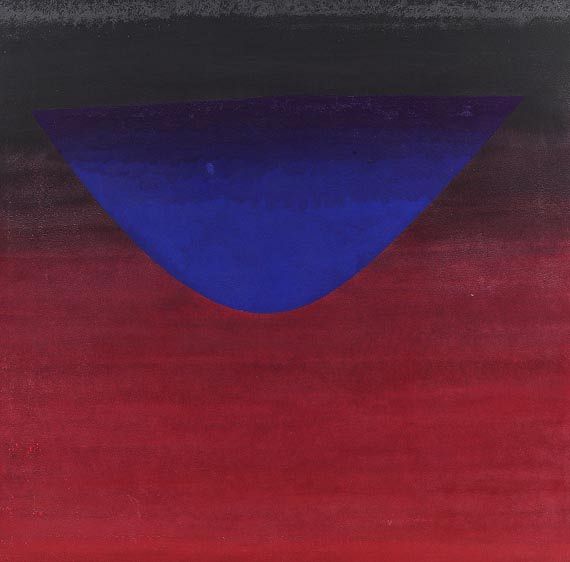 Rupprecht Geiger, son of the painter and printmaker Willi Geiger, was born in Munich in 1908. The family went to Spain for a year in 1924 and Rupprecht Geiger accompanied his father on trips from there to the Canary Islands and Morocco. By then Rupprecht Geiger had begun to draw and paint watercolors. In 1926 he joined the architecture class taught by Eduard Pfeiffer at the Munich School for the Applied Arts. In 1935 Rupprecht Geiger took his final examinations in architecture and spent half a year with his father in Rome. From then on he worked for a Munich architecture practice until he was sent to the front in Russia in 1940. During that bleak period, Rupprecht Geiger painted landscapes in dark watercolor tones. In 1942, Geiger was briefly on leave in Germany before being sent to the Ukraine as a war painter. After the war ended, Geiger returned to Munich. In 1948, his first abstract picture was shown in Paris at the Salon des Réalistes Nouvelles. A year later Geiger joined forces with Baumeister, Matschinsky-Denninghoff and Winter to form the ZEN 49 group. In the 1950s Geiger arrived at the distinctive style that has made his reputation.
By the end of the 1950s the process of simplification, which Geiger adopted in the interests of perceiving color with the least possible extrinsic influence on it, was very far advanced. “The diversity of abstract forms with their often bizarre outlines distracts from color whereas with archetypal forms such as the rectangle and the square, the color can stand out uninfluenced” (Rupprecht Geiger, quoted in Jürgen Morschel, in: Künstler. Kritisches Lexikon der Gegenwartskunst, Munich 1988/92, p. 10). The simplification of form and the reduction of the number of colors did not, however, lead to Constructivist painting. On the contrary, form is thus permitted to become a scaffolding for pure color. This is also true of the present work, which is quickened by the contrasts between hot and cold in the vibrant blue color wedge and the throbbing black-and-red ground.
Between 1959 and 1977 Geiger showed work at several documentas in Kassel. In 1962 he gave up architecture entirely to devote himself exclusively to painting. Three years later he was appointed professor at the Düsseldorf Art Academy, where he held the chair until 1976. Geiger has been a member of the Academy of Fine Arts in Munich since 1982. Rupprecht Geiger is still living and working in Munich. With his abstract color compositions, he is viewed as a leading exponent of Color Field painting in Germany. [NB]