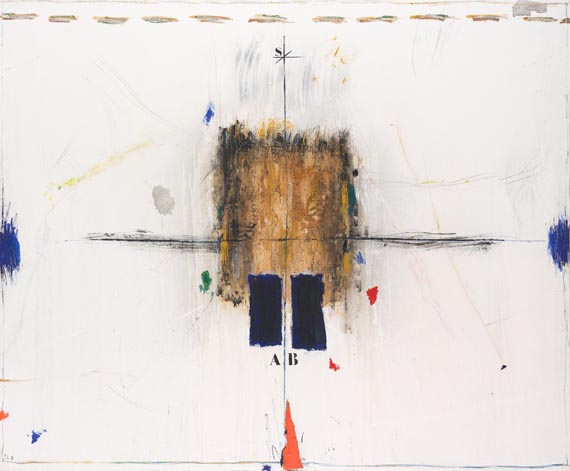 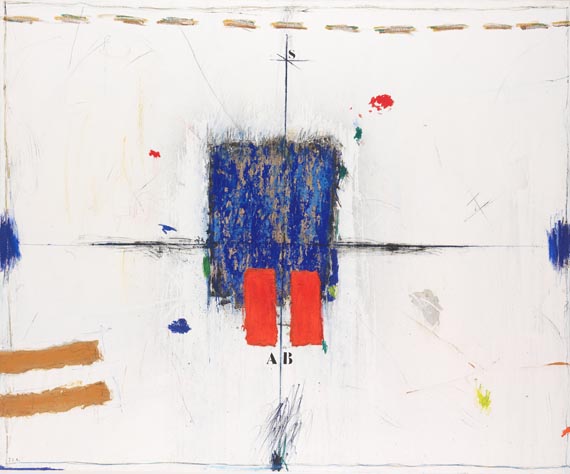 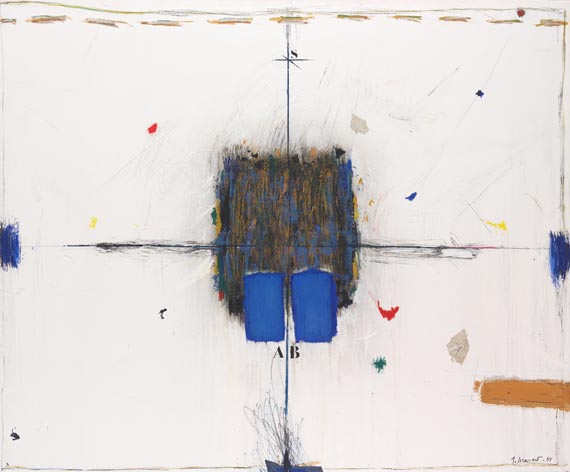 Le Clavier. 1987.
Oil, colour chalk and collage on canvas. In 3 parts.
Parts 3 signed and dated lower right. Each numbered "1" to "3"in lower left, part 1 and 2 additionally monogrammed there. Each signed and dated on verso. cm ( in)Each 200 x 240 cm (78,7 x 94,4 in) It is difficult to impute a certain style to the autodidact James Coignard. He is in close contact with Matisse, Braque and Chagall in his early years, and is a friend of Joan Miró as of the 1950s,as well as with other Spanish and Catalan artists. Their sculptures and frescoeshave a major influence on his style, which is characterised by overlapping layers and the relief-like structure. Our extraordinary work, that uses the classic means of the triptych, reveals a mystic world of images that unites power and poetry at the same time, by means of its economically finished surfaces, pastose colours, paper collages and characters. [NB]

The artist James Coignard is represented by the Editions Sonet AB, the art agency of the Swedish media group Sonet, in Scandinavia from 1969 to 2003. He made this triptych in 1987 as a commissioned work for the Sonet facilities near Stockholm
In good condition. Minimally rubbed in places of edges. Collaged and pastose areas with minor craquelé in places. Marginal areas detached from canvas.

More Information
+
Sell
Get a free appraisal for a similar object!
+
Register for
James Coignard
+
Buying from A-Z
+
Contact a specialist
Share