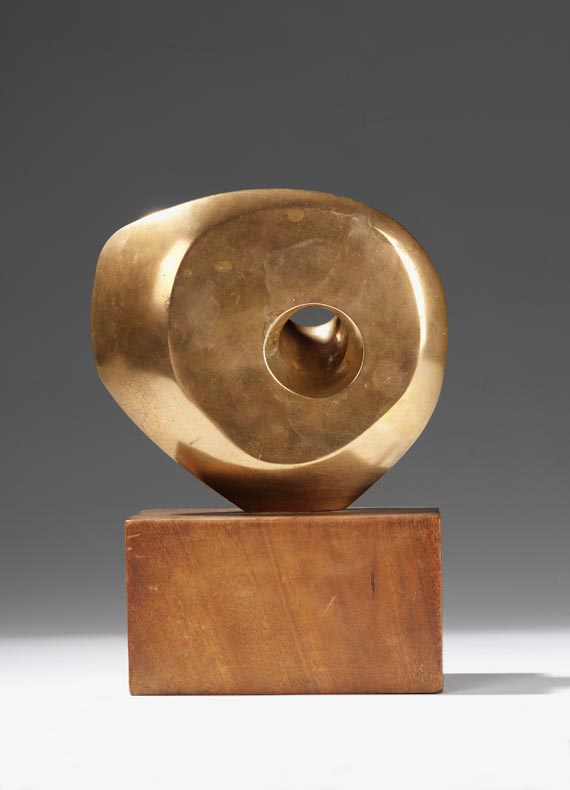 Because she was so close to Henry Moore - Hepworth and Moore were even both natives of Yorkshire - whose monumental sculpture was acclaimed early in his career, it was difficult for Hepworth to launch her own style. Unusually for a woman artist, she developed a highly reductive formal language in her sculpture that eschewed all narrative par erga. Hepworth worked with the material as such, returning its essential significance to it through design. It is in fact the beauty of the material which distinguishes her works. The holes drilled into and through her sculptures can be seen as virtually the only dynamic element Hepworth has imposed on the material once formed. Thus the artist has achieved a reduction of mass without violating its integrity. Brancusi, Arp and Naum Gabo, who were all friends of Hepworth’s, may be said to have inspired her, but did not contribute crucial impetus to the urgency of her handling of form. Hepworth, who was married to Ben Nicholson for many years and influenced his painting as he did her approach to sculpture, remains a solitary figure, both as a woman and a sculptor, in the consistently powerful expressiveness of her work.

The artist died during a fire in her studio in St. Ives in Cornwall on May 20, 1975. [KD]
EXPERTISE: We are grateful to Dr. Sophie Bowness, Hepworth Estate, London, for her help in cataloguing this lot. The work is recorded under the no. BH 272 and will be included in the forthcoming revised version of the catalogue raisonné
PROVENIENZ: Galerie Wilhelm Großhennig, Düsseldorf.
Private collection South Germany.

Bronze probably treated with zapon, the protective lacquer partially rubbed, there with oxidation stains. Slight oxidation with verdigris in the opening.