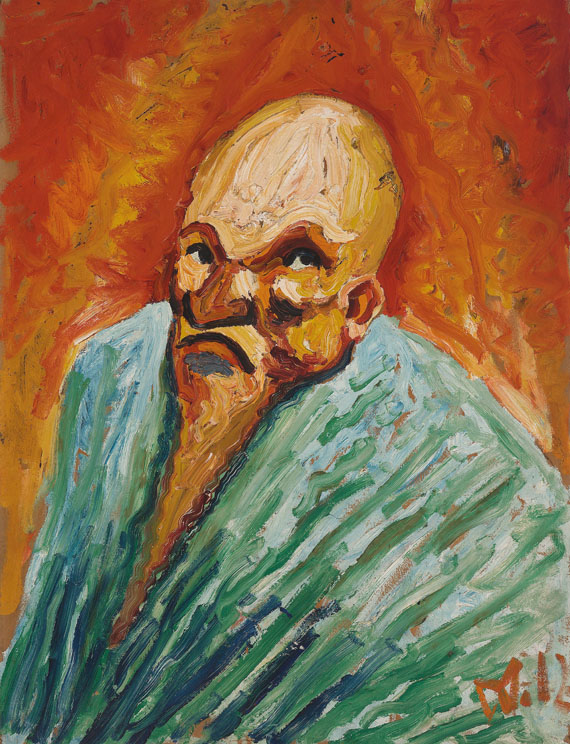 We are grateful to Walter Weihs, Wilhelm-Morgner-Archiv, Soest, for his help in cataloguing this lot. The work is recorded in the handwritten estate registry by Georg Tappert and the continuation by Weihs under the no. 187 with the title "Rotbärtiger Jude".

Our painting dates from Morgner’s most productive phase. After a period in which he resorted to formal stylisation and works were shaped by linear or pointillist structuring, Morgner turned in 1912 to intensively exploring color. His palette was now essentially reduced to the three primary colors plus green. Our picture is based on the contrast between red and green, which, in the upper and lower picture zones, lead an existence of their own that is largely independent of the overall composition. The man’s head and beard each slant into those surfaces, disrupting them to make a maximum of dynamic impact. The memorable distinctiveness of form and palette definitely make this portrait one of Wilhelm Morgner’s best paintings. A progression towards abstraction is already suggested here and can be described as a consistent development. Within the few years allotted him, Morgner worked more intensively through the possibilities of artistic expression than any of his contemporaries, bequeathing a significant œuvre that is exemplary for his era. [KD].

In good condition, colors still fresh. The margins minimally bumped or squeezed as well as rubbed. Corners with minor loss of the uppermost cardboard layer. One tiny hole in the upper image margin. The pastose parts partially with small color losses.