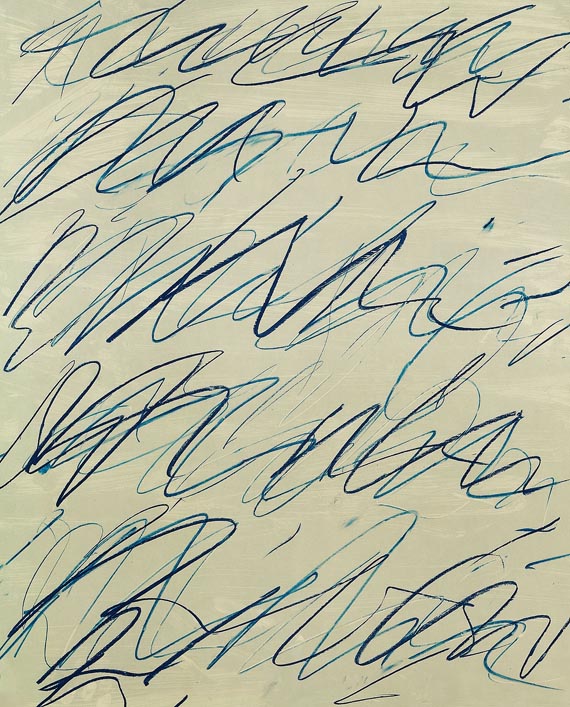 Roman Notes III. 1970.
Offset lithograph in colours.
Bastian 23. Signed, dated and numbered 73/100 on the reverse. On offset cardboard. 86,8 : 70 cm (34,1 : 27,5 in), the full sheet. Cy Twombly was born in Lexington, Virginia on 25 April 1928. In 1947 he began studying at the School of the Museum of Fine Arts in Boston and in 1949/50 at the Washington and Lee University in Lexington. In 1950 Twombly went to New York, where he continued his studies at the Art Students League. Here he met Robert Rauschenberg. One year later he changed to the Black Mountain College, North Carolina and studied under Robert Motherwell and Franz Kline. Together with Rauschenberg he travelled to South America, Northern Africa, Spain and Italy in 1952. In his early works from the beginning of the 1950s Twombly was heavily influenced by Kline, but also by Paul Klee and he dealt with the possibilities of a gestural-expressionistic brush stroke and developed a sensitive web of signs, words, numbers and representational fragments. After a year of military service he taught at the Southern Seminary and Junior College in Buena Vista, Virginia in 1955/56 and travelled a second time to Rome in 1957, where he settled in 1960. The very same year he had his first one-man show at Leo Castelli's gallery.
During the 1960s Twombly's “Schultafel-Bilder” emerged, in which the act of writing was turned into a physical gesture. In the middle of the 1970s his works became more complex. Twombly created expressive structures with collaged sheets and various painting instruments. From painting to painting the graphic elements were dissolved in strong colour whirls to disembogue into fauve-like flower paintings in the 1990s. Beside his painting œuvre white, sculptural works of finds and simple materials came into existence since 1955. In 1973 the first retrospective of his work took place in Bern, later followed by important exhibitions et al. at the Whitney Museum, New York in 1979, the Kunsthalle Zürich in1987 and the Museum of Modern Art, New York in 1994. His artistic merit was honoured by numerous prices. The Cy Twombly Gallery was opened in Houston in 1995. The museum arrangement had been designed by the architect Renzo Piano and Cy Twombly himself.