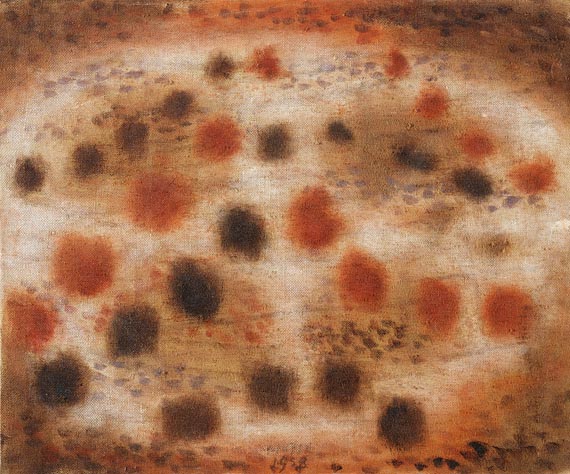 Automne en Dalmatie. 1958.
Oil on canvas.
Signed and dated lower centre. Once more signed and dated as well as titled on the reverse. 38,3 : 46 cm (15 : 18,1 in). [AS] Zoran Music was born in Bukovica near Gorizia on 12 February. In 1934 he finished his studies at the art academy in Zagreb. Afterwards he spent half a year in Spain. Between 1934 and 1940 Music lived in Maribor. Then he moved to Ljubljana, where he lived until 1943. In October 1943 he went to Venice. Music was arrested in October 1944 and in December 1944 he was deported to Dachau , where he franticly sketched the life in the camp under extremely difficult circumstances. 36 of approximately 200 drawings were preserved. After his liberation in 1945, Music returned to Ljubljana at first and then to Venice.
The first solo show took place in Venice in 1946. In 1948 Massimo Campigli, Oskar Kokoschka and Mark Tobey came to see Music in Venice. Since 1953 Zoran Music also had a studio in Paris, which the photographer Brassaï, with whom he became close friends, placed at his disposal. Every year between 1956 and 1960 Music spent some time in Dalmatia. A new beginning in painting evolved around the artist's preoccupation with the Dalmatian landscapes. The series “Nous ne sommes pas les derniers”, in which the artist transformed the terror of his experiences in a concentration camp into documents of universal tragedy, was made between 1970 and 1975. Music’s works were shown in numerous international exhibitions, such as the large retrospective exhibition at the Grand Palais in Paris in 1995.
EXPERTISE: We are grateful to the archive Zoran Music, Switzerland, for their kind help in cataloguing this lot. The work is recorded there
PROVENIENZ: Frank Perls Gallery, Beverly Hills, California 1958 (with the label on the stretcher).