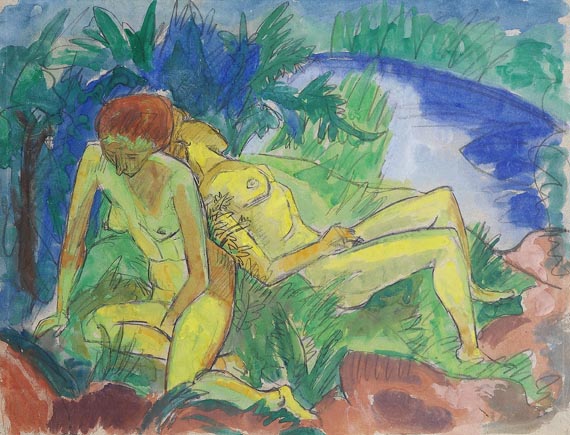 Frauen am See I. Wohl 1920s.
Watercolour and pencil.
Thiel 525 (221). With two estate stamps on the reverse, one with number "221". On light grey laid paper. 46 : 60 cm (18,1 : 23,6 in), the full sheet. Fritz Schaefler studied at the Munich Art Academy and became art editor of Der Weg magazine in 1919. After the Munich Revolution, in which he took part, was quelled, he was forced to flee that same year to Chiemsee. There the influences he absorbed from the “Blauer Reiter” and other Expressionists fruited in a productive and colourful phase of his work. Outdoor nude studies were a dominant theme. Trained in drawing and painting from the nude in his Academy years, Schaefler rediscovered the genre in reductive forms that tended to types. His nudes at a lake appear thoroughly comfortable in their natural element there, attesting to harmony and accord between man and nature. [NB]