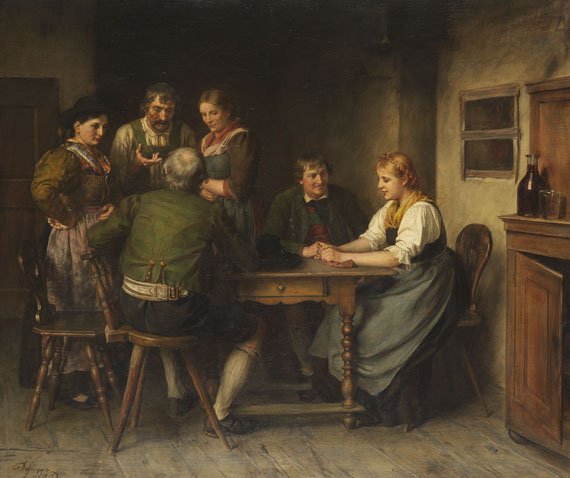 Franz von Defregger was born the second son of the wealthy farmer Michael Defregger at the Ederhof at Stronach in Tyrol in 1835. After his father's death, he sold the family's farm and went to Innsbruck, where he began a carver-apprenticeship under Michael Stolz. Stolz soon recognised his artistic talent and organised a meeting with Karl Theodor von Piloty. On the painter's suggestion Defregger attended the preparatory class at the Kunstgewerbeschule in Munich under Hermann Dyck and switched to Hermann Anschütz' painter's class at the Akademie der Bildenden Künste in autumn 1861. A following study trip led him for a longer period to Paris in 1863. There he got acquainted with the school of Barbizon, which influenced him especially in his nature pieces. After returning from Paris, he stayed in Munich and Eastern Tyrol, where mainly portraits of relatives and friends were executed. In 1867 he painted the study ‚Der verwundete Jäger', which helped him to be accepted as von Piloty's pupil. Defregger mainly painted scenes from the every-day-life of Tyrolean farmlife and genre-like depictions of the nearest history, which stood in an emphatic contrast to von Piloty's extensively staged society-paintings. Defregger soon became one of the most popular genre-painters of the ‚Munich School' and had an academic influence. In 1878 the artist was appointed professor for history painting at the composing class of the academy in Munich, where he taught until 1910. His prestigious villa in the Königinstraße in Munich, which was built in 1880 soon became one of society's meeting points. In the following years Defregger received numerous honours and awards, which culminated in the bestowal of the Bavarian Crown Order, combined with a title of nobility, in 1883. Beside the academic genre and history painting, which was regularly shown at exhibitions, the painter painted during the 1890s several freer portraits, landscapes and images from his private life. Defregger was not able to associate himself with Modern Art, which established new guidelines in art, but in the shadow of his painting intimate sketches and studies came into existence, which proved in an impressing way his coloristic talent in landscape painting and his power of observation in portrait arts.

The "Brautwerbung“ (matchmaking) is a popular and recurring motif in Defregger's vast oeuvre. Generally, two variants must be differentiated between. The early variant has its origins in the late 1870s, the later around 1900. For three early paintings Defregger chose a composition showing a father with his slightly clumsy son applying to a presumably widowed mother in order to ask for one of her three daughter's hand for marriage. Some twenty years later Defregger once more picks the theme as central subject, however, the he made the second variant in a different arrangement. This painting "Die Werbung" from 1900 counts among those of the later variant. The young couple sits in the parlor at a table in right, he is happily holding her hand, she lowers her head, looks shy but cheerful. In the left half of the image both fathers are engaged in an excited conversation and seem to negotiate prenuptial agreements. Both mothers are also present. As portrait master Defregger succeeds in capturing even the most subtle nuances on the persons' faces: the tenderly loving young couple, the mothers' worries and the somewhat skeptical expression of the arguing father. The room's simplicity even increases the event's importance and turns the observer's concentration to the interaction and the depicted persons' emotional situation. 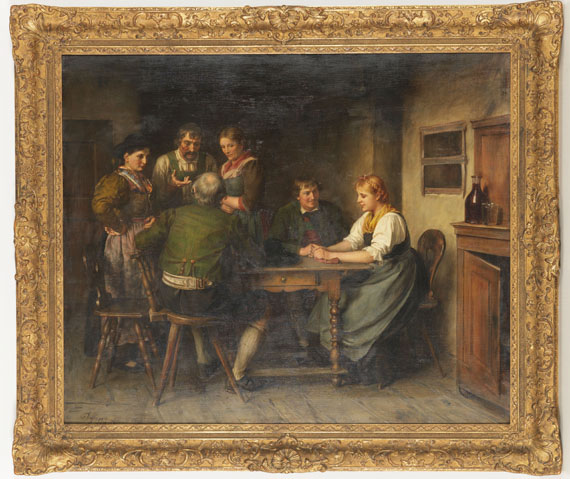