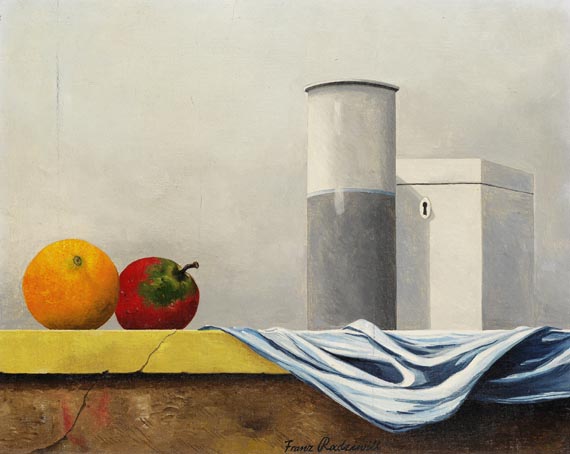 Stilleben mit Konservendose und Äpfeln / Lied an die Konservendose. 1952.
Oil on canvas, on panel.
Firmenich/Schulze 660. Signed lower centre. Inscribed with the worknumber "456", with the artist's address stamp as well as with date and inscription on the reverse. 41 : 51,5 cm (16,1 : 20,2 in). After completing an apprenticeship as a brick-layer, Franz Radziwill studied architecture at the Höhere Technische Staatslehranstalt in Bremen until 1915 and also attended evening classes in figure drawing at the Kunstgewerbeschule. He was introduced to artist circles in Fischerhude and Worpswede by his teacher Karl Schwally, where Radziwill met Bernhard Hoetger, Otto Modersohn, Heinrich Vogeler and Clara Rilke-Westhoff. In 1919 Radziwill settled in Berlin for a couple of years where he joined the 'Freie Secession' and the 'Novembergruppe'. He moved to Dangast on the North Sea in 1923, and had his first one-man exhibition in Oldenburg two years later. He developed a friendship with Otto Dix in this year, who introduced him to the 'Neue Sachlichkeit' circles and worked together with Dix in his studio in Dresden until 1928. He participated in the large 'Neue Sachlichkeit' exhibition in the Stedelijk Museum in Amsterdam in 1929. Radziwill took over Paul Klee's chair at the Düsseldorf Akademie in 1933. The Nazis forced him to resign two years later and banned him from practising his profession. After his military service from 1939 to 1945 Radziwill returned to his house in Dangast.

The recondite enchantment of Franz Radziwill’s still lifes is reluctant to impart itself to the viewer. Two couples stand facing each other: on the right, two containers in cool, objective grey-and-white and, on the left, the vibrant reddish orange of the fruits lying on a broken, ochre-coloured stone platter. The blue-tinted tablecloth leads a life of its own; at best it serves to underscore the cool components of the overall colour scheme. A duel is being fought out here, a duel of colours and colour values, a dispute between organic life and what has been preserved, between life and death. A contest that Radziwill engaged in, consciously so or otherwise, throughout his career and which informs his œuvre more than those of any of his contemporaries.

Franz Radziwill has been celebrated by several large retrospective exhibitions. His works are owned by numerous museums, where they are on permanent exhibition, representing a major contribution to New Objectivity. [KD]