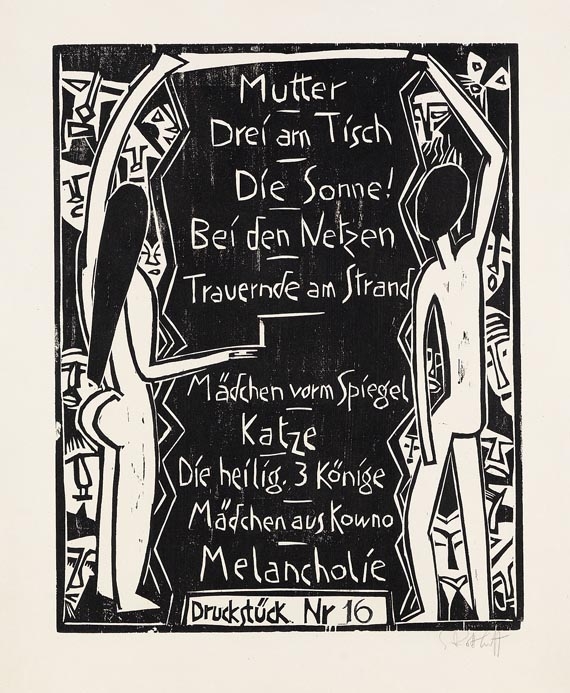 Neumann-Mappe. Zehn Holzschnitte von Schmidt-Rottluff. 1914-19.
The portfolio comprising 10 Woodcuts, the table of contents printed as a woodcut and the cover woodcut on the portfolio's cover, published by Graphisches Kabinett J. B. Neumann, Berlin 1919.
The 10 woodcuts and the table of contents signed, two plates dated. Numbered 16/(75) on the contents. One dated in the plate. On slightly brownish laid paper by J.W. Zanders (with watermark). Up to 50,5 x 39 cm (19,9 x 15,4 in). Sheet: 62,5 x 51 cm (24,6 x 20,1 in). cm ( in)The painter, print-maker and sculptor Karl Schmidt was born at Rottluff near Chemnitz in 1884. His father was a miller. In 1905 he enrolled to study architecture at Dresden Technical University. The year he met Ernst Ludwig Kirchner, Erich Heckel and Fritz Bleyl there, he co-founded with them the group of artists known as 'Die Brücke'. Their first joint portfolio of prints appeared in 1906. He outdid his colleagues in insisting on pure primary colours and his Expressionist paintings were dominated by forceful handling of the medium to achieve intensity and brilliance. After moving to Berlin in 1911, he addressed himself to problems of form, developing an increasingly reductive geometric formal language, a development that was interrupted by the outbreak of war. While serving on the Eastern Front, he did a cycle of religious woodcuts in which he tried to come to terms with the horrors of war. It is regarded as his graphic masterpiece. In 1918 he returned to Berlin.

The 1920s saw a spate of print sequences of all kinds published. Most of them document the rich graphic production of the Expressionists. Portfolios and sequences of prints devoted to a single artist, on the other hand, are rarer. The present portfolio with ten woodcuts by Karl Schmidt-Rottluff, which was published by J. B. Neumann in Berlin, unites ten prints selected by the artist from blocks carved in the years between 1914 and 1918. Because they are not thematically linked, they provide a broad overview of Schmidt-Rottluff’s graphic work, in which he excelled in the medium of woodcut. Since these prints are among the best Schmidt-Rottluff ever did, the temptation to sell them separately would have been strong indeed. Hence portfolios have rarely survived complete. This complete set, in almost perfect condition, should therefore attract a great deal of attention.

In 1937 his work was declared degenerate at the notorious Munich exhibition of 'Degenerate Art'. By 1941 he was forbidden to paint and was expelled from the painters' guild. After the second world war he was appointed to a chair at the (West) Berlin Hochschule für bildende Künste. The Brücke Museum, which he had endowed with a collection of his works, was inaugurated in 1967. Numerous retrospectives in the Federal Republic paid tribute to this artist, who, as art historians unanimously agree, was one of the most important German Expressionists. [KD]