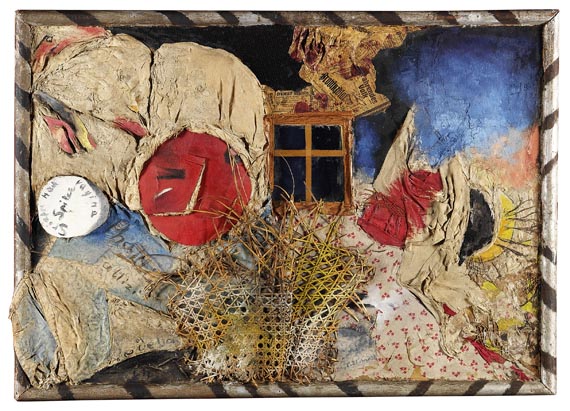 Ohne Titel. Um 1920/21.
Assemblage of cloth, paper, cardboard, oil paint, rattan, glass and wood.
Signed lower centre. Inscribed several times in the image. 61,5 : 86 cm (24,2 : 33,8 in). Curt Ehrhardt was an Expressionist painter but the Dadaist assemblages that he produced between May 1920 and April 1922 hold their own against his paintings to defy all appearances of contradiction. The close contact Ehrhardt had with Herwarth Walden’s circle induced him to turn to Dadaist “anti-art”, which as pictures of destruction and creation combined utilitarian objects and refuse into collages. The paramount influence here was Kurt Schwitters, whose Merzbilder were exhibited at the “Der Sturm” gallery in 1919. “Merz”, a term coined by Schwitters, implied creating interrelationships between as many mundane things as possible. Ehrhardt also worked according to this principle in composing colour and all sorts of materials with and against each other, thus giving them the aesthetic value of art works. [NB]
EXPERTISE: We are grateful to Prof. Dr. Peter Arlt, Gotha, for his help in cataloguing this lot
PROVENIENZ: From the artist's estate.