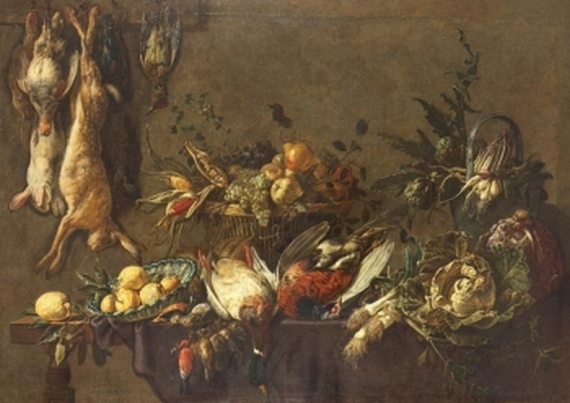 Küchenstillleben mit erlegtem Wild, Früchten und Gemüse. 1646.
Oil on canvas, doubled.
Signed and dated "fecit an 1646" lower left. 124 : 172 cm (48,8 : 67,7 in). The Flemish painter of animals and still lifes Adriaen van Utrecht begins his education as a student of the painter and art trader Herman de Ryt in 1614. During the first half of the 1620s he travels Europe and studies French, Italian and German art. He settles in Antwerp in 1625, becoming master in the St. Luke's gild. He marries the daughter of the painter Willem van Nieulandt three years later. Most of his works, mainly still lifes, but also the "chikenyards", which are famous with his contemporaries, originate from the period between 1629 and 1652. His large-format paintings depict the displayed goods on the market and fresh venison. Frans Snyder's influemnce becomes obvious especially in the depictions of game, however, Utrecht prefers to use dark and cooler colours. Warm earthen tones and strong chiaroscuro, however, dominate his still lifes and are proof of his examination of Italian art. The artist receives the order to paint several pictures for the Huis ten Bosch, the governours seat near The Hague, from the secretary of Prince Frederick of Oranie in 1646.

It is the artist's speciality to paint in a very strong almost plastically seeming manner, which is also clearly visible on this painting. Van Utrecht stays true to this style throughout his creative period, it is only his later works that show the influence of Jan Fyt and Jan de Heem. [AS]