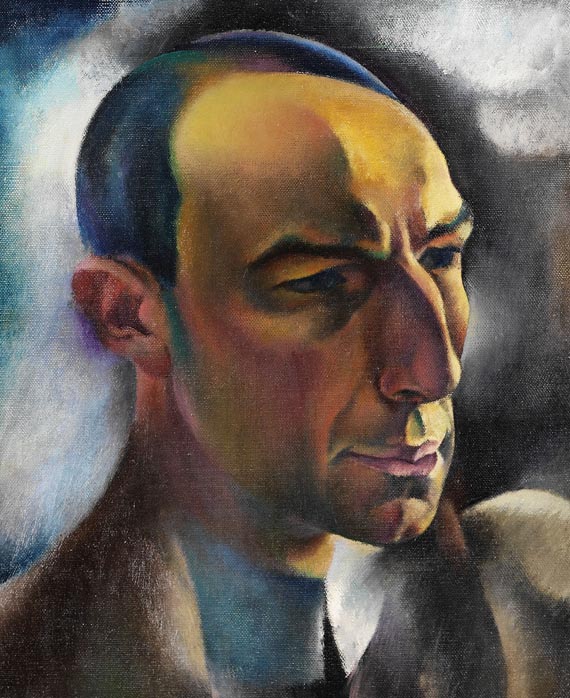 Porträt des Kunsthändlers Alfred Flechtheim. Um 1910/11.
Oil on canvas.
41 : 33 cm (16,1 : 12,9 in). Hanns Bolz studied at the Düsseldorf Art Academy, probably around 1905-08, before going to Paris, where he spent most of his time until the first world war broke out. Bolz rented a studio in Montmartre at 49 rue Gabrielle, which had previously been used by Pablo Picasso. Bolz also frequented the Café du Dôme and soon belonged to the small colony of German artists who had become established there around Purrmann and Levy. It was there at the latest that Bolz met Alfred Flechtheim, the art dealer who first showed the distinguished “dômier” circle, that was entirely heterogeneous stylistically at his gallery in 1914. Apart from paintings, Bolz’s œuvre comprises graphic work (notably caricatures) and sculpture that has visible affinities with Modigliani and Lehmbruck. His paintings clearly reveal his study of French Cubism and Fauvism. By 1912, Bolz was experimenting with abstraction.

Our portrait of Alfred Flechtheim evidently dates from Bolz’s early Paris years. Typical of Bolz’s work at that time is the Cubist-inspired handling of light and shade, which skilfully unites contrasting light and dark picture zones by means of gentle modulation and subtle transitions. The tonal quality of the palette, based on variation of related tones, is characteristic of the artist’s early Paris years. Comparisons with Bolz paintings dating from around 1908-10, including Frau mit Hut [Woman Wearing a Hat] and Stillleben [Still Life] reveal close similarities both in composition and palette with our work and assure attribution to Hanns Bolz. This portrait of the art dealer Alfred Flechtheim can be viewed as a major work by Hanns Bolz as a Rhenish Expressionist. The perspective the artist chose makes his sitter’s head fill the picture surface and the oblique lighting from behind lends particular distinction to the facial features. Stylistically our portrait unites inspiration assimilated from Paris painting with tendencies towards New Objectivity and exemplifies the distinctive contribution made by Hanns Bolz to classic Modern art.

Hanns Bolz was represented at all important exhibitions of his day. He participated in the 1912 Sonderbund exhibition in Cologne, the Armory Show in New York and Chicago and Herwarth Walden’s “1. Deutscher Herbstsalon” [“1st German Autumn Salon] in Berlin in 1913. Bolz was conscripted in 1914 and sent to the front, where he suffered grave injuries from poison gas, which caused him to become partly blind. He was so affected by the toxic gas that he was discharged prematurely and died in 1918 as a consequence of the poisoning. Very little of his work has survived since, under the terms of Hanns Bolz’s will, his works were all to be destroyed. Flechtheim showed works saved by friends of the artist’s at a memorial exhibition in 1922. [KR]
EXPERTISE: This work is accompanied by an expertise signed by Ernst Cremer, Aachen, and dated 10 October 2008.
The authenticity of this work has kindly been confirmed orally by Prof. Dr. Heusinger von Waldegg, Karlsruhe.
The authenticity of this work has kindly been confirmed in written form (e-mail) by the author of the online catalogue raisonné of Hanns Bolz's works Erich Kukies, Alsdorf
PROVENIENZ: Der Neue Kunstsalon Max Dietzel, Munich (with the stamp on the stretcher).
Neue Kunst Hans Goltz, Munich (with the label on the stretcher).
Private collection South Germany.