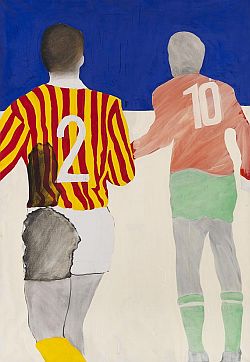 Konrad Lueg
Fußballer - 1964
Oil on canvas
Estimate price: € 180,000-300,000
Munich, April 27, 2022 (KK) - Everyone in the art scene knows “Konrad Fischer“ as one of the most influential gallerists with locations in Düsseldorf and Berlin. Under the name of Konrad Lueg he was a likewise acclaimed painter and, above all, a German Pop art pioneer. Now the first work he ever sold, formerly part of the seminal collection of Gustav Adolf and Stella Baum, will be called up in the Evening Sale at Ketterer Kunst in the Auction in Munich on Juni 10/11. The work is being offered at auction for the first time and has an estimate of US$ 190,000-320,000 (€ 180,000-300,000).

'Fußballer' is an impressive large-size work. It was made in Düsseldorf in 1964 as part of a series of pictures of football players and boxers based on photos from newspapers and magazines. Recapturing figurative image contents, Konrad Lueg took a stand against the zeitgeist, and found orientation in the inspiring powers of Pop art. Roy Lichtenstein's motives gives Lueg the confidence to depict everyday culture in a pattern-like manner, as well as to give the sports and entertainment industries a new painterly character.

"The work 'Fußballer' is an icon of German Pop art for which Konrad Lueg was both a pathfinder and a particularly loud advocate," explains Nicola Gräfin Keglevich, Senior Director at Ketterer Kunst. "I became aware of Konrad Lueg's importance in context of the auction of the Collection Duerckheim in 2011. Football players and boxers were at the central motives of Lueg's short creative period."

Konrad Lueg's 'Fußballer' is the first work he sold. After a brief phone call with Rudolf Jähring of Galerie Parnass, the young artists Konrad Lueg, Sigmar Polke and Gerhard brought their works straight to the gallery where they put them on display in the garden. The collector couple Baum acquired Lueg‘s painting and transported it away in the open rooftop of a Volkswagen Beetle. 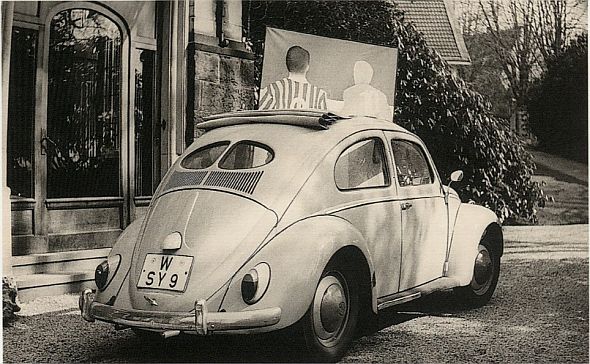 
The Wuppertal textile merchant Gustav Adolf Baum and his wife Stella, later name giver for the Wuppertal Comprehensive University, were passionate collectors who called the contemporary art scene their home. They were committed to giving new trends a chance, supported young emerging artists and proved their confidence by making bold acquisitions like the famous "Stuhl mit Fett" by Joseph Beuys, but also of entire work groups of New Realism, Concept Art and Land Art.

Konrad Lueg had already made a name for himself in the Düsseldorf art scene. Among other things, he had organised an action with Gerhard Richter at the furniture store Berges in Düsseldorf in October 1963 under the motto "Leben mit Pop – eine Demonstration für den kapitalistischen Realismus", which would go down in art history as the birth of German Pop art. The artist's took an ironic angle on the officially mandated Socialist Realism in Eastern Europe, while they also criticized Western consumer culture.

The action was the result of the close cooperation and exchange between Konrad Lueg, Sigmar Polke, Manfred Kuttner and Gerhard Richter, who were all students at the Düsseldorfer Kunstakademie at that time. After they had seen reproductions of American Pop art, the students of Bruno Goller and Karl Otto Götz saw the first original works by Roy Lichtenstein at the Parisian art dealer Ileana Sonnabend in 1963. The fascination for these works gave a boost to the development of Pop art in Germany.

Born in Düsseldorf in 1939, Konrad Fischer had a very short creative artistic period from 1963 to 1968 as Konrad Lueg (his mother's maiden name). However, he is recognized as a key figure of the exciting and modern art scene of the 1960s with its new ways of artistic presentation.

As of late 1967 until his timely death in 1996 he managed the Galerie Konrad Fischer and did not just regard himself a gallery owner but also an advocate of a cutting-edge exhibition program. Providing exhibition premises for scores of newcomers from the US and Europe, Fischer's success story began with a show of the American artist Carl Andre.

Ketterer Kunst (www.kettererkunst.com and www.ketterer-internet-auctions.com) with headquarters in Munich and branches in Hamburg, Duesseldorf, Berlin as well as with a global network of representatives in, among others, the USA and Brazil, was founded in 1954. The auction house has a focus on Fine Art from the 19th to the 21st Century and Rare Books. In its market segment Ketterer Kunst is not only Germany's number one but also the leading house in the European Union. Ketterer Kunst is a specialist for German art, as well as for many international artist who are sought-after on the European market and who regularly realize record prices at Ketterer Kunst. According to the annual 2021 artprice database, Ketterer Kunst is the only and best-selling family business represented in the global Top 15.