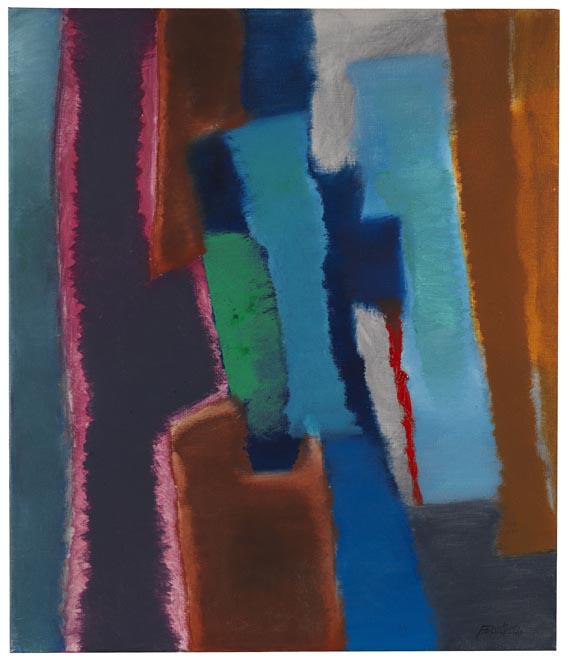 Fritz Winter was born in Altenbögge near Unna in 1905. In 1919 he began an apprenticeship as an electrician and worked as a miner. At the beginning of the 1920s he made his first attempts in drawing and painting. In 1927 he applied successfully to the Bauhaus in Dessau, where he studied for three years under Klee, Kandinsky and Schlemmer. In 1929 Winter participated in the exhibition 'Junge Bauhausmaler'. He got acquainted with Ernst Ludwig and Erna Kirchner, whom he visited repeatedly in Davos. After his studies Winter taught at the Pädagogische Akademie in Halle. In 1933 he moved to Munich and in 1935 to Dießen on the Ammersee. The National Socialists declared his art 'degenerate' and banned him from exhibiting his works. Winter was drafted in 1939 and sent to the eastern front. He was captured by the Russians shortly before the end of the war and not released until 1949. During the war he drew the so-called 'Feldskizzen' in small sketchbooks, which prepared his famous series 'Triebkräfte der Erde'. Immediately after his return Fritz Winter was co-founder of the group 'Zen 49' and soon joined the European avant-garde movement. Elaborating his works of the 1930s, which were made under the influence of the Bauhaus, Winter developed his own pictorial language, which set him apart from the Informel. In 1953 Winter began teaching at the Landeskunstschule in Hamburg and two years later he was appointed professor at the Staatliche Hochschule für Bildende Künste in Kassel.

The 1960‘s marked the birth of his so-called rectangle – and serial images, among which this work also counts. The focus is on the color during this period of creation and the compositions are dominated by color fields. Bands and stripes in dazzling colors are rhythmically arranged over the picture, their edges blurred. Thus he created a differentiated and dynamic mostly vertically arranged meshwork of colors in which the tints melt with and contrast one another at the same time. In "Kommendes Blau" it is rich violet, green and brown tones that enter an exciting and fascinatingly versatile dialogue with various nuances of blue.

On the occasion of his 60th birthday, the artist was honored with large retrospectives in several German cities. He received the 'Großes Bundesverdienstkreuz' in 1969. He retired from his chair in Kassel in 1970 and returned to Diessen on the Ammersee. A Fritz-Winter-House was opened in Ahlen in 1975. Fritz Winter died on 1 October 1976. Even before his death Winter was considered one of the most famous German post-war artists. He was honored posthumously with the ‘Rubenspreis’ from the city of Gießen. [KP].