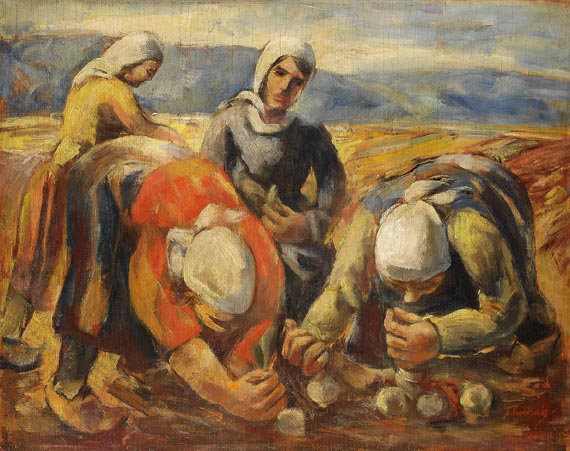 Rübenernte. 1930/34.
Oil on panel.
Signed lower right. Titled and inscribed with the artist's address on the reverse. 64,3 : 81 cm (25,3 : 31,8 in). After the second world war, Friedrich Ludwig studied art at the Städel-Schule in Frankfurt before setting out for Paris, where he continued his studies for a while at the Académie Julian. His encounter with the work of Cézanne and Cubism made a lasting impression on Ludwig. In discovering his own style, the painter took as his models the French and German avant-garde and borrowed his passion for colour from Expressionism. Friedrich Ludwig was a prolific painter of landscapes, portraits and still lifes. In 1934 Ludwig Justi (director of the Berlin National Gallery 1909-33) made it possible for Ludwig to show his work at the Munich Art Association. The show was forbidden by the National Socialists, who threatened to destroy the pictures. Ludwig would feel the effect made on him by that incident for the rest of his life. His painterly legacy is large. As a German Expressionist of the second generation, Friedrich Ludwig is an artist whose work awaits discovery and the appreciation it deserves. [KD]
EXPERTISE: The work will be included in the forthcoming catalogue raisonné of Friedrich Ludwig's works, prepared by Prof. Sigurd Marien, London
PROVENIENZ: Private collection Lower Saxony.

In good condition. A few smaller retouchings in the figures, the sky and on the ground.