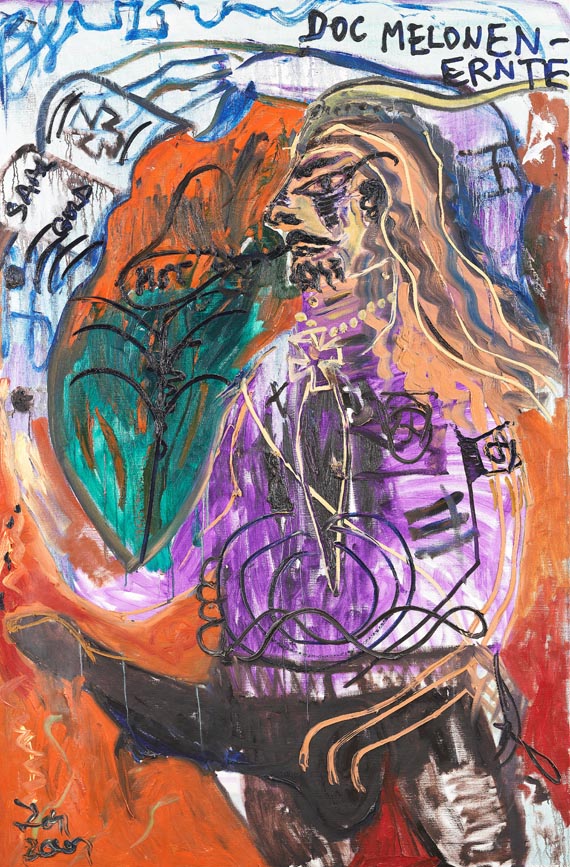 Don Knurrhahn (Selbstportrait). 2002.
Oil and hairs on canvas.
Monogrammed and dated lower left. Signed, once more dated and titled on the reverse. With inscription "MEE 581" on the stretcher. 210 : 140 cm (82,6 : 55,1 in). Jonathan Meese was born in Tokyo on 23 January 1970 to German-Welsh couple. Growing up in Ahrensburg, Holstein, near Hamburg, Meese studied from 1993 to 1998 at the Hochschule für bildende Künste in Hamburg with Franz Erhardt Walther. Dropping out before graduation, Meese was given a contract in 1997/98 with the renowned Berlin Contemporary Fine Arts Gallery. Within the space of just a few years he had produced a diverse œuvre in all available media and materials, accompanied by frenetic exhibition activity and a heavy presence in the media. Complex multimedia installations that intervene in space developed out of “Meese stands”, assembled by dint of avid collecting and accompanied by complex performances and readings. Imaginary film heroes, historic figures with negative or tragic associations and characters from myth and legend are the cast here, accompanied by Meese self-portraits in various poses and masks as well as cryptic neologisms added in his own handwriting.

The present work is part of his series of self-portraits rendered in explosively Expressionist brushwork. They are somewhere between exhibitionism, role play and a sensuous intoxication with colour. “Many people think I expose something private in my work but that is actually wrong. I even owe it to the thing to keep my private obsessions out of it. Nor do they have anything to do with what must be shown. There we are again at a point where one shouldn’t be making an irrevocable law out of one’s personal opinion. [...] I’m not yet brash enough to believe that my squalid perversion might be something important. There is no privacy where art is concerned; if something is private, it can never become a fundamental principle.” (Meese, quoted in: portalkunstgeschichte.de/events/portraets_/9.php, State: 22 Sept. 2008).

The work Meese has produced in recent years has encompassed a wide range of activities, including collaborative works undertaken with artists such as Albert Oehlen and Daniel Richter, artists’ books, pamphlets, illustrations and stage design. Meese’s works have been presented in innumerable solo shows and are represented in distinguished public collections. The artist lives and works in Ahrensburg and Berlin. [NB]