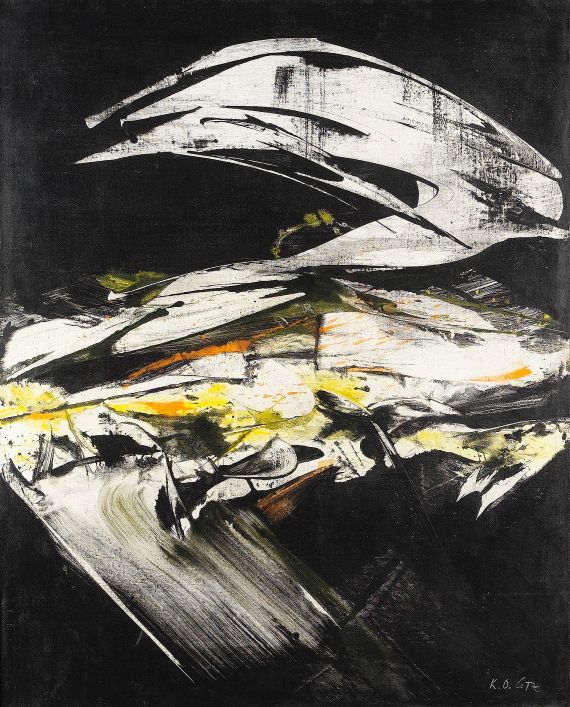 We are grateful to Mr. Joachim Lissmann, K.O. Götz and Rissa Foundation, for his kind expert advice.

In the early 1930s Karl Otto Götz began to work both with abstraction and representation and continued to do so despite being forbidden to paint and exhibit during the National Socialist era. Around 1949 he eschewed representational art, becoming the first German artist to join COBRA. Götz was a co-founder of “Quadriga” in Frankfurt, a group that represented a form of Tachism influenced by Wols and automatism. This step led to a crucial turn in Götz’s career in 1952: what had been consolidated forms were now replaced by a more dynamic signature that the artist would never again abandon, featuring the use of a special three-stage squeegee technique. The practical side of his work was invariably preceded by an elaborate theoretical process of working up the pictorial idea, which often entailed translating it into sketches and gouaches for years in advance. In three rapid work stages, dark color was applied with a brush to a light ground and then partly removed with a squeegee – used like a palette knife.

Our work is one of a series that Götz had been painting since the 1970s, in which he systematically varied a pictorial schema. This approach represents to him a means of avoiding entrapment in the artistic cul-de-sac to which the spontaneous act of painting, if uncontrolled, inevitably leads. Unlike De Kooning or Pollock, who resorted to frequent changes in color or even returned to the occasional representational motif, Götz “burst the bounds of form and dissolved forms in each schema of a non-representational figuration on a large scale, which enabled him to build up an enormous number of variants, thus sparing him the necessity of having to choose subject matter. Hence the way was open for a wide variety of non-representational, highly expressive pictures, articulated and rhythmicised in all sorts of different ways, which, viewed either as a whole or in series, represent an inexhaustible repertory of Informel structures” (Horst Zimmermann (ed.), K. O. Götz. Malerei 1935-1993, Exhibition cat. Staatliche Kunstsammlungen Dresden Albertinum Gemäldegalerie Neue Meister,1994, p. 55).

Karl Otto Götz is a leading exponent of German Informel who was acclaimed internationally early on, for instance, at the 1959 documenta 2. During two decades of teaching at the Düsseldorf Art Academy, Götz exerted a formative influence on artists of such widely differing temperaments as HA Schult, Sigmar Polke and Gerhard Richter. [EH].