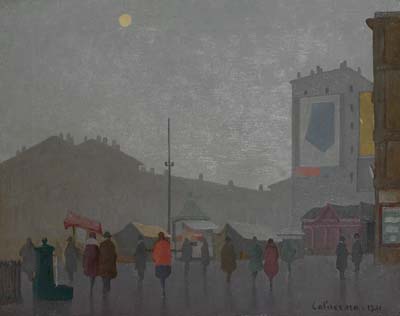 Milano, Piazza C. Correnti nella nebbia
Oil on canvas, 1931 .
Signed and dated lower right. 51 : 63 cm (20 : 24,8 in). Even in Calderara’s early representational works, verticals and horizontals assumed a pivotal role. The ‘Piazza C. Correnti’ motif is particularly suited to being a synthesis between these two basic directions, which end in pure abstraction in the artist’s late work. Calderara has arranged the buildings about the Piazza in such a way that they are depicted as resting on a grey foreground zone, which is viewed frontally. The two buildings on the right-hand edge of the picture-plane, a mast in the middle and especially the people in the Piazza, point into the sky, looming transcendentally over the whole, as directional indicators in the vertical. The composition conveys little spatiality via perspective. Other important challenge met adroitly by Calderara are the handling of light and exploring subtle gradations of colour, which later lead to monochrome and a preference for the most delicate pastel tones. This work can most certainly be viewed as an early Calderara, heralding his later detachment from landscape and architecture and opening up the way to non-representational geometry, colour and light. [LB]