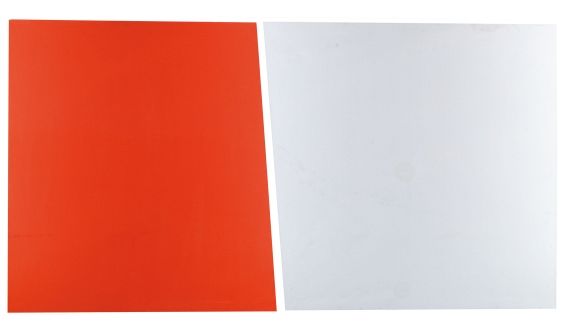 Ohne Titel. 1974.
Acrylic on canvas, in two parts.
Each signed and dated on stretcher. 180 : 340 cm (70,8 : 133,8 in). The monumental painting, consisting of two canvases, belongs to the group of monochrome paintings, with which Gerhard Merz begins his art production in 1971. His teacher Reimer Jochims and his theory and art work influence him in a way, that he devotes his painting to a radical reduction and focuses on the basic means of artistic expression. The surface of the monochrome painting is mainly defined by the outer form, as the colour application does not leave any inner structures behind. The canvas soaks up the colour, because of the absence of a priming, therefore the pigment seems dull and dry. Merz continuously applies the colour in up to 40 finely glazed layers. The reason for the low number of works from the group of monochrome paintings may be this extremely time-consuming process. Only 19 paintings of this kind were created up until 1975. The numerous superimposing layers in a light grey and a bright vermilion open a light sphere with a suggestive effect on the observer. The large format of Merz's pictures, that he derived from the human body, allow to immerge into the work in a nearly physically sensed manner. [HD]

Good overall impression. Partly minmally soiled and with the stretcher pushing through, stronger in the red area. Red part with two soft water stains. White part with some dents as well as a water stain in the centre. Partially slightly dirty.