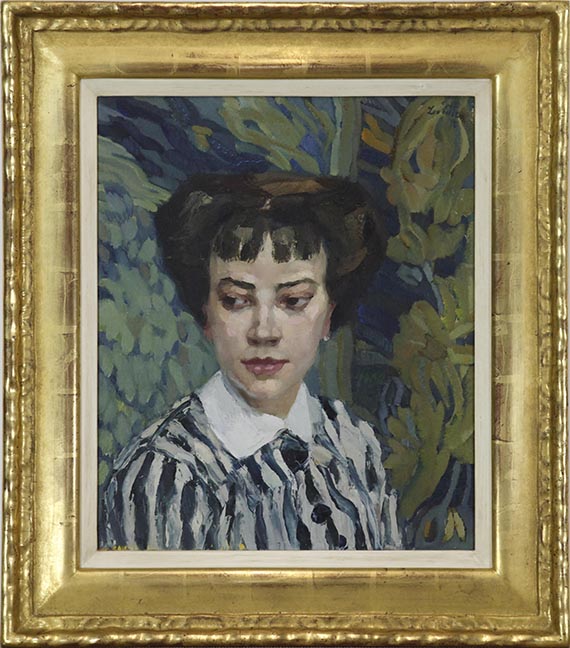 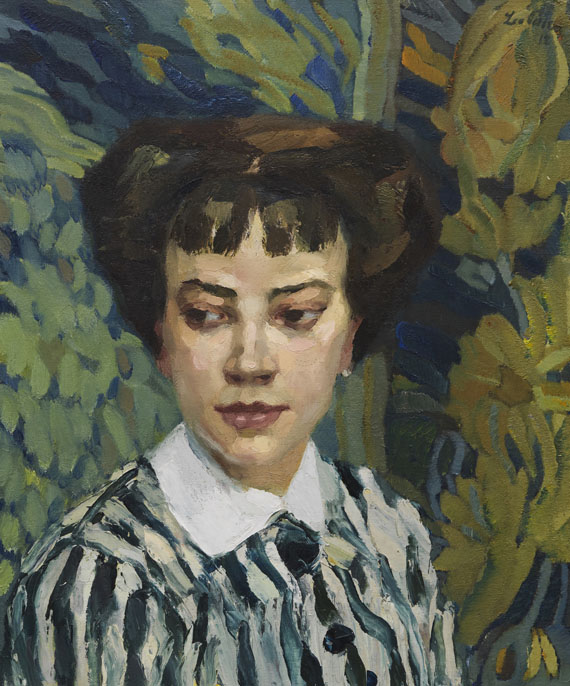 • With his female portraits, Leo Putz celebrated his first success around 1908-10.
• From the artist's best creative period, influenced by the summer stays at Palace Hartmannsberg in the Chiemgau, when Putz attained his characteristic style
• Painted in the typical strong broad brushstroke that effectfully models the face
• A drawing of the famous bohemian and rich heiress Mara Hofmann by Putz adorned the cover of an issue of "Jugend" in 1912.

Maria (Mara) Victoria Eleonora Catharina Hoffmann (1891–1929) grew up on her father's estate near Salzburg, the wealthy Frankfurt entrepreneur and art collector Jacob Ludwig Hoffmann. After his death in 1910, she moved to Graz with her mother. The following year, the 20-year-old young woman traveled to Munich on her own. Unaffected by financial worries, she attended the carnival festivals of the artists and the Schwabing Bohème and took drawing lessons herself with Leo Putz, with whom she was in contact through her relative Franziska Putz from Graz. Putz immortalized the fun-loving and beautiful young woman in four portraits, three drawings and an oil painting that was long considered lost due to incorrect attribution. Based on the Mara Hoffmann pastel by Putz on the cover of the magazine "Jugend" from 1912, which was decisive for cultural life at the time, the identity of the sitter can be clearly identified (cf. Jugend, vol. 17, issue 25, 1912, title page). With his characteristically broad and blotchy line, which skillfully captures the light and models it sculpturally, Putz succeeds in creating a moving and lively painting despite the calm and almost absent pose. The blue and white of the blouse creates a connection with the curtain with a pattern of flowers and tendrils known from Putz's studio, which playfully flows around the almost childlike face. At the time, Putz devoted numerous works to the model in the outdoors and also dissolves the image space of this studio painting into a decorative and imaginative sphere through ornamental lines and colors. Her life continued to be glamorous even after her time in Munich: she married Franz Graf v. Schlik zu Bassano und Weisskirchen (1882–1963), a bon vivant, racing driver and tennis player, who became one of the role models for the character James Bond for Ian Fleming during his time in Kitzbühel in the 1920s. [KT]
More Information
+
Sell
Get a free appraisal for a similar object!
+
Register for
Leo Putz
+
Buying from A-Z
+
Contact a specialist
+
Leo Putz Biography
Share