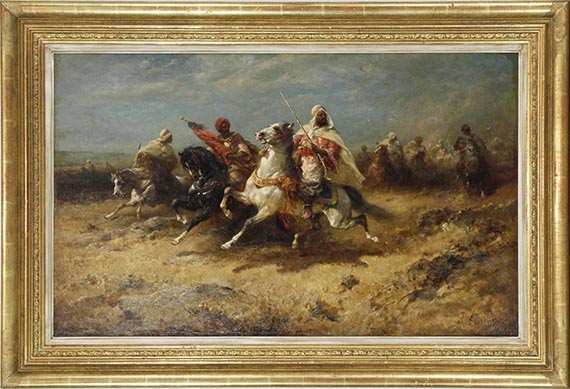 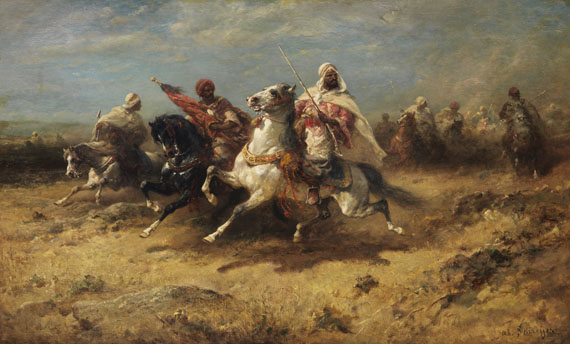 • The group of Beduin horsemen is Schreyer's most successful motif
• Schreyer was one of the main German representatives of the oriental genre
• Starting in France, oriental scenes became increasingly popular with collectors in Europe and the USA since the 1830s
• Paintings of Arabic horsemen are in international collections like the Metropolitan Museum of Art, New York, the Musée d'Orsay, Paris and the Saint Louis Art Museum.

We are grateful to Dr. Christoph Andreas, Frankfurt am Main, for his kind expert advice.

Adolf Schreyer is one of the most famous and successful German Orientalist painters, whose works were highly sought after at the time, especially among aristocratic and upper middle-class buyers. Towards the end of the 19th century, several works also made their way into prestigious American collections, among them the Vanderbilts or Rockefellers. Schreyer’s motifs were largely inspired by his lifestyle and his extensive travels. Following his studies at the Städelsches Kunstinstitut in Frankfurt, he joined Prince Emmerich von Thurn und Taxis on a journey through Hungary, Wallachia and southern Russia. In 1855, he accompanied the Prince to the Crimean War in the role of draftsman and volunteer. Living the life of a soldier and traveling the mysterious and folkloric countries of the Black Sea and the Balkans, he filled his sketchbooks with numerous horse and equestrian scenes that would later serve him as a repertoire of motifs. Orientalist painting, which combined fierce battle scenes with animal portrayals and the folkloric genre, was beginning to emerge at that time, especially in Paris which Schreyer first visited in 1856. In the wake of the conquest of Algeria in the early 1830s, painters developed an interest in “exotic lands”, which some of the Romantic artists, such as Eugène Delacroix, Eugène Fromentin, and Alexandre Décamps, explored themselves. Their focus, thoroughly romanticized and exoticized, was on Arabian warriors, noble horse breeds and the unfamiliar desert landscape, which they interpreted with an animated and colorful artistic expression. Schreyer’s travels to Spain, the North African French colonies, Egypt and Syria in the 1850s resulted in the creation of numerous Orientalist scenes. Painting in a free, dynamic style which abandons the graphic element in favor of color, Schreyer is primarily interested in portraying people and animals in motion and capturing the fascinating appearance and bearing of the Bedouin horsemen. However, the Orient depicted in the paintings is not a place that can be pinpointed geographically. Egypt, Morocco, Algeria and the Middle East all blend into a stretch of land that existed only in the painters’ imagination. Schreyer successfully exhibited his works at the Paris Salon, the epicenter of the movement. Honoring its poetic, striking expression, his oeuvre was awarded the Gold Medal in 1865. [KT]
More Information
+
Sell
Get a free appraisal for a similar object!
+
Register for
Adolf Schreyer
+
Buying from A-Z
+
Contact a specialist
Share