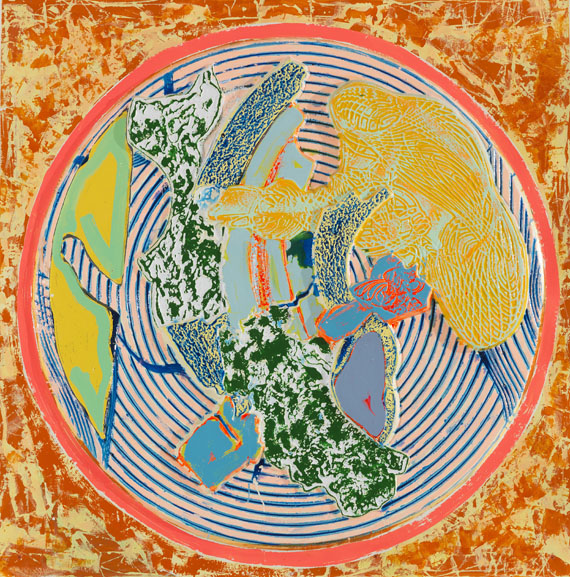 • Gaudy, almost psychedelic picture of the fictitious place "Egyplosis".
• Marvelous document of Frank Stella's stylistic development in the 1990s.
• He is considered one of the key protagonists of American post-war art.
• His first retrospective exhibition was at the Museum of Modern Art in New York in 1970.
• For the first time on the international auction market (source: artprice.com).

"EGYPLOSIS or SACRED PALACE, a place on an island in a lake one thousand miles west of CALNOGOR in ATVATABAR. It consists of an aggregation of temples carved out of a block of green marble. The chief building is a Grecian theatre with a dome of multi-colored glass one hundred and thirty feet above the lowest tier of seats. Egyplosis is built above the Infernal Palace, a group of rock-hewn temples devoted to the occult worship of Harikar, where objects and living things can be created by spiritual power. The Infernal Palace is reached from Egyplosis through a maze of sculptured vegetation." (description of the place Egyplosis from William R. Bradshaw's novel "The Goddess of Atvatabar" New York 1892, quoted from: Gianni Guadalupi, Alberto Manguel, The dictionary of imaginary places, Milan 1996, p. 183)

Circular, colorful, imaginative and almost psychedelic are Frank Stella's interpretations of fictional places from world literature. They bear sonorous names like Fattipuff, Dubiaxo, Plutusia, Jundapur, Bilbimtesirol or Egyplosis. They are taken from the "Dictionary of imaginary places" and are translated by Frank Stella into his pictorial language so typical of the 1990s. In direct comparison with his early, monochrome "Black Paintings" and "Concentric Squares", which are still considered pioneering works of Minimal Art, it is hard to imagine that these works were created by the same artist. With regard to his personal, artistic development, however, "Egyplosis" fits perfectly, both in terms of theme and style. With his famous "Shaped Canvases" and the series of "Copper Paintings," he was already probing the limits of the image carrier in painting in the 1960s, searching for a new meaning for the traditional medium and gradually striving for more three-dimensionality. The use of color also changed over the decades. As early as in the mid-1970s, he created large, brightly colored reliefs, mostly of aluminum and fiberglass, composed of geometric shapes. In the early 1990s, he finally conquered three-dimensional space with sculptural works, relief friezes, and outdoor sculptures. In terms of content, Frank Stella also repeatedly takes up new themes which he explores in extensive series of works, such as "Cones and Pillars" or the "Moby Dick" series. Not infrequently, the discovery of a new thematic focus is accompanied by a stylistic change. In the series "Imaginary Places," which in addition to unique works such as "Egyplosis" also includes two graphic cycles, he tested the diversity of the circular image section and the radiant power of the colors in ornamental compositions reminiscent of mandalas in the 1990s. Hardly to be surpassed in imagination, color power, and content references, his interpretations of fictional places in world literature exemplify his radical, artistic development, "which led him from minimalism to maximalism" and distinguish him as one of the "most versatile and innovative artists" of his generation (Holger Broeker, Allgemaeines Künstlerlexikon, Vol. 106, Berlin/Boston 2020, pp.98-99). [AR]
More Information
+
Bidding Options
+
Bid by telephon / written
+
Contact a specialist
+
Buying from A-Z
+
Preview & Auction Procedure
+
Catalogue Order
+
Register for
Frank Stella
+
Frank Stella Biography
+
Sell
Get a free appraisal for a similar object!
Share 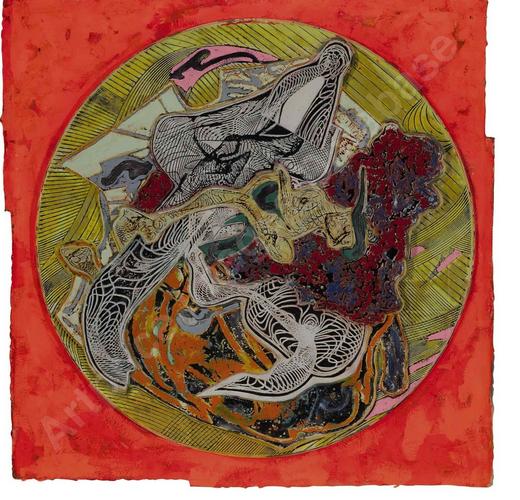