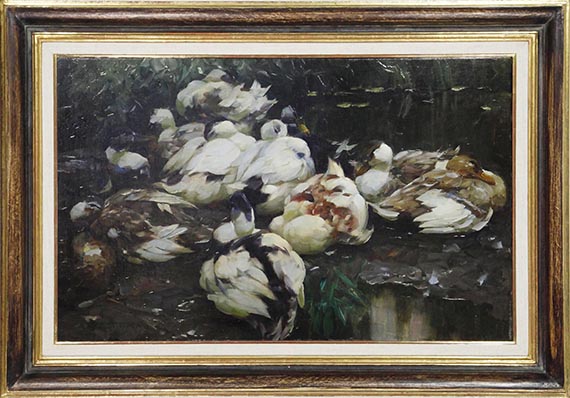 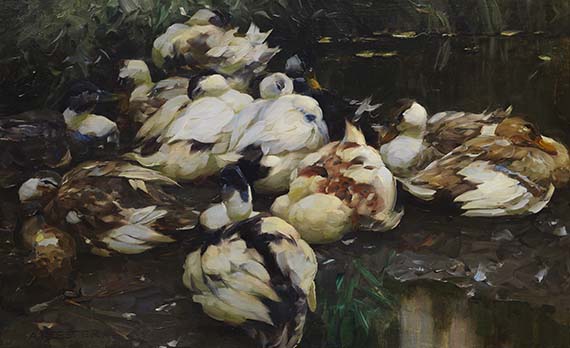 Few other artists have succeeded in deriving as many variations from a single motif as Alexander Koester from his ducks. Presenting his first duck painting at the Great Berlin Art Exhibition in 1899, the public was impressed by the endless number of ideas this genre and landscape painter had to offer on the subject. The duck motif first appeared around 1896, when Koester married and settled in the town of Klausen in South Tyrol, where he discovered his father-in-law’s farm ducks as a subject for his paintings. Numerous presentations at exhibitions followed, along with a number of awards. His ducks became very popular and were exhibited in collections and museums; among the buyers were Kaiser Wilhelm II, who purchased the duck painting “Siesta” in 1900, followed by King Vittorio Emanuele III of Italy in 1907. Koester’s paintings were notable for their loose, impressionistic brushstroke. In this painting, the flock of ducks is portrayed in direct close-up, while broad, casual daubs suggest the shore and the ambient weather scenery. Koester captures the fleeting impression of the ducks’ ever-changing shapes in bright, impasto dabs of color that only blend in the eye of the beholder. Instead of a visual narrative, or the portraiture of particularly exotic species, the artist focuses on the subject’s visual allure, with skillfully captured light and color setting the animals’ plumage and the reflections of sunlight on the water aglow. Koester’s brushwork closely follows the structure of the feathers, modeling the compact shape of the plump animals. The artist thus gives the genre of animal or poultry painting, which goes back to 17th-century Dutch art, a modern interpretation. In his work, the formal aspect of pure painting, which often assumes a serial character, takes on a life of its own beyond the motif and the visual narrative. In later years, Koester bred his own ducks on his estate in Diessen on Lake Ammersee. He also liked to visit zoos to complete animal studies and learn about rare duck species, becoming a recognized duck expert in his own right. Koester mastered this inherently simple theme with a compositional imaginativeness that offers great variation despite the sheer number of duck paintings he produced. To challenge himself, he often sought out the reflective surface of water and the fine texture and shimmer of plumage, which never ceased to fascinate him. [KT]
More Information
+
Sell
Get a free appraisal for a similar object!
+
Register for
Alexander Koester
+
Buying from A-Z
+
Contact a specialist
+
Alexander Koester Biography
Share