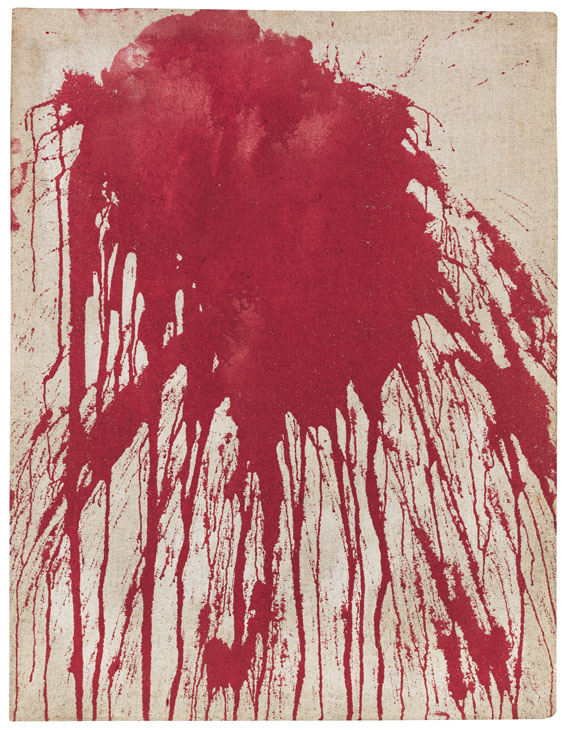 • Early energetic document of Nitsch's legendary Action Art.
• Almost all of his Nitsch's famous "Schüttbilder" (Pour Pictures) are in the color of the blood: Red!
• The lately deceased artist joined the renowned Pace Gallery only in February this year.
• Nitsch is the main representative of Viennese Actionism, his famous "Schüttbilder" are in many important international collections, among them the Museum of Modern Art, New York, Tate Liverpool and the Albertina in Vienna.

PROVENANCE: Galerie Fred Jahn, Munich.
Duerckheim Collection (acquired from the above, ever since family-owned).

"I always say that my painting is the visual grammar of my intention on the image surface."
Hermann Nitsch. Interview with Rudolf Stoert, Kunstforum 1991 pp. 272f.

Our work by Herrmann Nitsch dates from the important early years of his oeuvre. At that time he was heavily criticized and attacked. At the time, his excessive painting style and his performances of the Orgy-Mystery Theater led to hostility and multiple convictions, including arrests lasting several days. The world-renowned artist, who died at the end of April this year at the age of 83, still had a full schedule for this year, which shows the immense interest and great recognition of his art. With "Hermann Nitsch's Painting Action" a major solo show by the artist is shown at this year's Venice Biennial. The works shown at the Biennial go back to a performance at the Vienna Secession in 1987. Now they can be seen as a work complex in Venice.

Since the mid-1950s, Hermann Nitsch has developed his own new art form. Music, literature and art merge into a total work of art that appeals to all the senses in the orgy-mystery theater that he created, which is often celebrated over several days. Furthermore, Hermann Nitsch developed his own version of Informalism from these performances: the ‘Schüttbild‘ (Pour Picture). The action of pouring is an artistic process and the result is a controlled coincidence. At the same time, the floating colors in Nitsch's work are always part of a cult act, which certainly evokes sacred associations. The color red stands for blood, as he sometimes uses it in his performances; because blood is the actual and sole medium that can transport the orgiastic-mystical vision of the artist. Burlap is primarily used as the image carrier, and this is also the case here, which has something archaic in its irregularity and coarseness. This original canvas records the artistic result of a painterly action with something fundamentally human. After the pouring process, the artist manually intervenes in the running color. These interventions by the artist can sometimes still be traced in the form of footprints or, as it is the case with our expressive Pour Picture from 1963, in the form of handprints on the left side of the folded canvas. [EH]
More Information
+
Sell
Get a free appraisal for a similar object!
+
Register for
Hermann Nitsch
+
Buying from A-Z
+
Contact a specialist
+
Hermann Nitsch Biography
Share