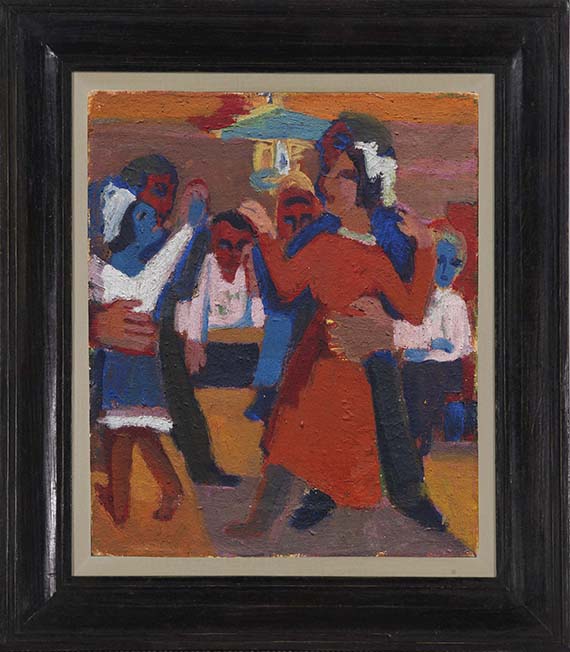 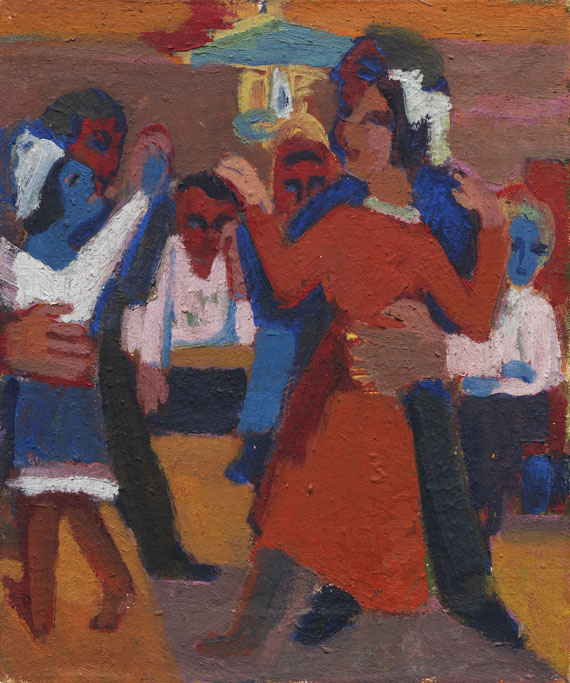 
• The artist's interest in movement and dance runs through his entire oeuvre.
• The particularly powerful, intense colors contradict the small format.
• From the formative early years in Davos.
• Kirchner immersed himself in his new world with all his senses.
• From the collection of Ernesto Blohm, one of the most important collections of German Expressionism.
• Family-owned for almost 80 years.
• Kirchner immediately paints the solemnly exhilarating event and incorporates it tangibly into his rhythm of life.

The work is documented in the Ernst Ludwig Kirchner Archive, Wichtrach/Bern.

"I am so happy to be here. At least I can get a little work done on the good days among these simple and fine people.“
E. L. Kirchner to Henry van de Velde, July 5, 1919.

The life of the shepherds and farmers with the animals on the alp became a central theme for Kirchner when he arrived in Davos for the second time on May 8, 1917. During the summer he lived with a nurse in the Rüeschhütte on the Stafelalp above Frauenkirch. Although he suffered from paralysis at times, he created landscapes and portraits characterized by an unbroken will to fight. And yet, Kirchner continues to be haunted by nightmarish fears. After a visit to the Stafelalp, Henry van de Velde, Flemish-Belgian architect and designer, was able to persuade his friend to confide in the psychiatrist and psychoanalyst Ludwig Binswanger. From mid-September 1917, Kirchner spent ten months in the Bellevue sanatorium in Kreuzlingen on Lake Constance. Kirchner returned to Davos from his stay in a sanatorium in July 1918 and lived in the hut on the Stafelalp that Martin Schmid had given him; It was not until September 20 that he moved into the winter-proof farmhouse, which the Müller family from the "In den Lärchen" farm group above the Längmatte in Frauenkirch made available to him.

Breathtaking mountain landscapes convey peace
The new surroundings had a vehement influence on the artist's life and work. He seems to have regained the calm he was looking for, which allowed him to paint moving and magnificent depictions of this breathtaking mountain landscape: "Stafelalp bei Mondschein" (Stafelalp Moonlight, Museum am Ostwall, Dortmund) or "Stafelalp. Rückkehr der Tiere" (Stafelalp. Return of the Animals, Kunstmuseum Basel) from 1919 are the titles of the new motifs. With the triptych "Alpleben" (Kirchner Museum, Davos), created in 1918, he paid tribute to the everyday life of the peasants in this barren environment, which grounded him, the mentally torn man, again.

This canon also includes the small-format, yet monumental-looking painting "Bauerntanz“ (Peasant Dance) from around 1920, whose solemnly lively events Kirchner noticeably incorporated into his rhythm of life. The view of the new environment, the participation in the life and celebrations of the mountain farmers are characterized by the same coherent order as the encounters in smoky dance cafés and staged encounters in the studio previously made in Dresden and Berlin. The everyday description of the mountain world - so it seems - connects seamlessly here. Kirchner identifies with his new neighborhood, basically lives like the dairy farmers and shepherds: he photographs them and paints them, raises the interest of his new fellows, who approach him - the oddball from Berlin - curiously and benevolently. Kirchner's impressions of that time can also be found in some of the graphic works of these years, for example in "Bauerntanz in der Sennhütte" (Peasant Dance in the Sennhütte) (Gercken 1136 and 1137) or "Tanzendes Bauernpaar" (Dancing Peasant Couple) (Gercken 1133).


The alpine landscape as a sanctuary
The alpine landscape is both a sanctuary and a new home for the sick Kirchner. "I'm so glad and happy to stay here. Here, at least in the good days, I can work a bit and be quiet among these simple and good people. I've fought my way here in solitude, which enables me to continue to exist with these sufferings. My days of the circus, cocottes and society are over [..] Today I have other tasks that lie here," Kirchner wrote to Henry van de Velde on July 5, 1919 (quoted from: Ernst Ludwig Kirchner. Briefe an Nele, Piper Verlag Munich, 1961, p. 99f.).

With his work, Kirchner reflects the elementary nature of the mountain landscape, analyzes the primitive and arduous everyday life of the shepherds and dairy farmers and celebrates with them in the evenings in the bar in Frauenkirch as a matter of course. He dedicates a rich pictorial chronicle to them, which he shows integrated into the daily rhythm of the animals on the alpine pastures during the summer months, and this way he conquers a new world for himself that had become his new world, which he immortalized in the comprehensive cycle of the ‘Alpsonntage‘ (Alpine Sundays) paintings. [MvL]
More Information
+
Sell
Get a free appraisal for a similar object!
+
Register for
Ernst Ludwig Kirchner
+
Buying from A-Z
+
Contact a specialist
+
Ernst Ludwig Kirchner Biography
Share