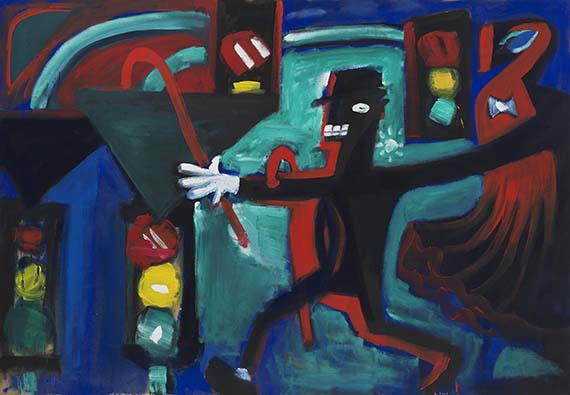 K. H. Hödicke, born in Nuremberg in 1938, came to Berlin in 1957. In the years that followed, the big city became one of his most important pictorial themes. Be it the sky over Schöneberg, the cobblestone streets, well-known monuments such as the Brandenburg Gate or the shop windows and neon lights of the modern city: Berlin is always present and inspires the artist to create new works and series of pictures. The "Ampelsprung" also seems to be a typical street scene, in which a man moves between the traffic lights and street signs of the big city. With his wide, slightly demonic smile, a hat, walking cane and a conspicuous white glove, he draws everyone's attention. Only then does the view fall on the indicated figure in the background, who is wearing a dress and bow tie. Her head shows no human features, but is vaguely reminiscent of a bird. The urban scenery, which is initially so harmless and easy to classify, begins to change more and more into a bizarre world inhabited by questionable characters. The subtitle of the work is "Happily excited, the capitalist shows Max Ernst Berlin". He provides clues as to who the characters are, such as the bird as Max Ernst's alter ego, and makes substantive allusions without providing a solution, which is true for many of Hödicke's works: "A lot remains puzzling and vague, and it is precisely this lack of clarity that constitutes one of the central qualities of his work. Enriched with art-historical cross-references and carnivalesque figures, wondrous associations emerge (..)" (Clemens Klöckner, Kasper in der Großstadt, quoted from: K.H. Hödicke. Malerei, Skulptur, Film, Munich 2013, p. 94) The "Ampelsprung" shows exemplary that Berlin is not just a recurring motif. In the large-format works from the 1980s, he uses seemingly everyday scenarios to develop multi-layered pictorial worlds with a humorous look and strong colors that capture the eye and finally leave the viewer with a lasting impression of the idiosyncratic inhabitants of the Berlin city. [AR]
More Information
+
Sell
Get a free appraisal for a similar object!
+
Register for
Karl Horst Hödicke
+
Buying from A-Z
+
Contact a specialist
+
Karl Horst Hödicke Biography
Share