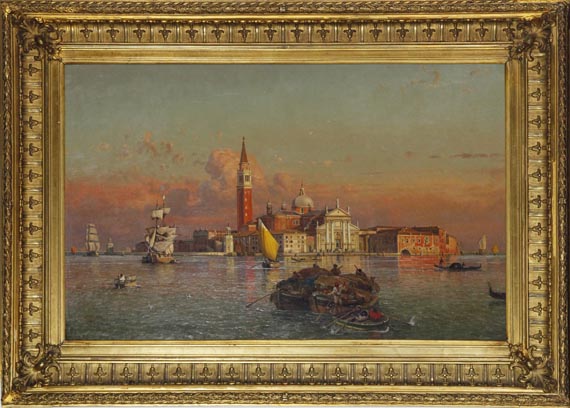 • With his views of Venice, Nerly coined the romatic idea of the city like no other 19th century artist.
• As of 1835 he devoted his entire painterly skills to Venice.
• One of the very few large-size view available on the auction market.
• Nerly's works are in many important collections of 19th centzury art, like the Alte Nationalgalerie, Berlin, the Hamburger Kunsthalle, and the Österreichische Galerie Belvedere, Vienna.

With a written confirmation of authenticity from Dr. Wolfram Morath-Vogel, Erfurt, from November 2022.

Friedrich Nerly’s romantic and atmospheric paintings of the lagoon city provide an unforgettable portrayal of 19th-century Venice. While in Hamburg, Nerly met Carl Friedrich von Rumohr. A writer, art historian and patron of the arts, von Rumohr was pivotal to the early Romantic period and took Nerly under his wing as a student. Together they set off for Italy in 1827, passing through Weimar, where Nerly had the pleasure of making Goethe’s acquaintance, and later Dresden and Munich. In keeping with the spirit of Romanticism, Rumohr impressed upon the young Nerly the importance of precise observation and empathy with nature. Traveling back via Venice, the young artist felt so moved by the city that he decided to stay. He married and moved into rooms with a studio in Palazzo Pisani on the Grand Canal. Thanks to his charming and intriguing personality, he quickly became a favorite among German artists and art lovers in Venice. With his artistic vision now fully devoted to the diverse facets of the city, he produced large views of the Bacino and the Grand Canal, along with detailed architectural studies and picturesque glimpses of the smaller winding tributary canals and alleyways. His preoccupation with the city also had conservational overtones. As early as 1845, he expressed his displeasure at the restoration work going on everywhere, which was destroying the mysterious city’s morbid, melancholy character. Residing in a “dilapidated palace” himself, the artist made the acquaintance of John Ruskin in 1852 whose 1851 work “The Stones of Venice” revealed similar sentiments. Nerly, for his part, lamented the “house and palace speculation frenzy” and the fact that “much beauty is going to ruin through nonsensical, tasteless restoration”; “On top of that, we now have gas lanterns, crafted in the most modern form, on the Doge’s palace! On the St. Marcus church! Dousing everything in this insolent brightness in which even romantic couples are no longer safe and have to take refuge under a black gondola.” (Letter from 1857, in: Römische Tage - Venezianische Nächte (Roman Days - Venetian Nights), exhibition catalog Erfurt 2007, p. 20). Of course, his romantic image of the city could not be preserved forever. Yet in his portrayal of the church island of San Giorgio Maggiore opposite the central Piazza San Marco, bathed in golden evening light, Nerly succeeded in immortalizing, in his very own way, the grandiose atmosphere still tangible in his time. [KT]
More Information
+
Sell
Get a free appraisal for a similar object!
+
Register for
Friedrich Nerly
+
Buying from A-Z
+
Contact a specialist
Share