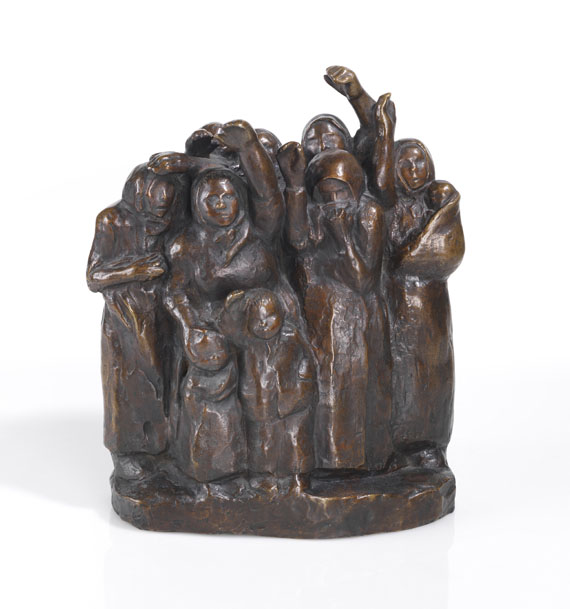 "In the meantime I made a small sculpture, which I started to enjoy, and which, I believe, turned out really good. A train with soldiers leaves, and a group of women waves them farewell."
From a letter to Beate Bonus-Jeep from 1936, quoted from: Martin Fritsch (editor)/Annette Seeler, Käthe Kollwitz, inventory catalog of Käthe-Kollwitz-Museums Berlin, Leipzig 1999, p. 348.

For an artist who had devoted her life's work primarily to graphics and drawings, a turn to sculpting seems unusual. Influenced by Rodin, however, Käthe Kollwitz quickly found her own approach to sculptures, which were almost exclusively cast in bronze based on factory models. The themes of her three-dimensional works remain the same as in her graphics, and yet she found her own greatness and intensity of expression in them. It was not until 1904 that she began to learn the basics of sculpting at the Académie Julian in Paris. Her path as a sculptor, which can be described as self-taught, is characterized by doubt and despair. A tenacious struggle for form until she had mastered the medium sufficiently to meet her own artistic standards, and until she received deserved public recognition for doing so. The first successes as a sculptor came in 1931/32, but this development was interrupted by the beginning reign of the National Socialist rule. In America, on the other hand, four bronzes by the artist were shown internationally at the Buchholz Gallery in New York - including the sculpture "Abschiedwinkende Soldatenfrauen" (Soldiers' Wives Waving Farewell). Käthe Kollwitz was a passionate voice of her time. Socially critical themes are at the core of her art, which also helped her achieve her artistic breakthrough. Kollwitz became known more or less overnight with her cycle of graphics "Ein Weberaufstand"(Weavers' Uprising), which was created between 1893 and 1897. In 1891 Käthe Kollwitz married the doctor Karl Kollwitz and lived with him in Berlin Prenzlauer Berg - a working-class district, where Karl Kollwitz was active as doctor, so the artist was surrounded by the daily worries and suffering of working-class families in her daily environment. The difficult living conditions of the working class became a constant theme in her artistic exploration. After the death of her youngest son Peter, who fell in Flanders during World War I, she became a vehement spokesperson for peace and created committed anti-war works. In 1937/38 Kollwitz worked alternately on different small sculptures, including "Turm der Mütter" (Tower of the Mothers), which all tell of grief, death and war. Following the motif of "Turm der Mütter", especially in the etching from 1918, which is regarded as the forerunner of the sixth sheet of the woodcut series "Krieg", Käthe Kollwitz developed the theme in sculpting. The unity of the women's group is remarkable both in terms of form expression. The quiet desperation is bundled into a united strength of those left behind. With her small sculptural oeuvre, Käthe Kollwitz made one of the most important contributions to classical modern sculpture in Germany, both in terms of content and form. [SM]
More Information
+
Sell
Get a free appraisal for a similar object!
+
Register for
Käthe Kollwitz
+
Buying from A-Z
+
Contact a specialist
+
Käthe Kollwitz Biography
Share