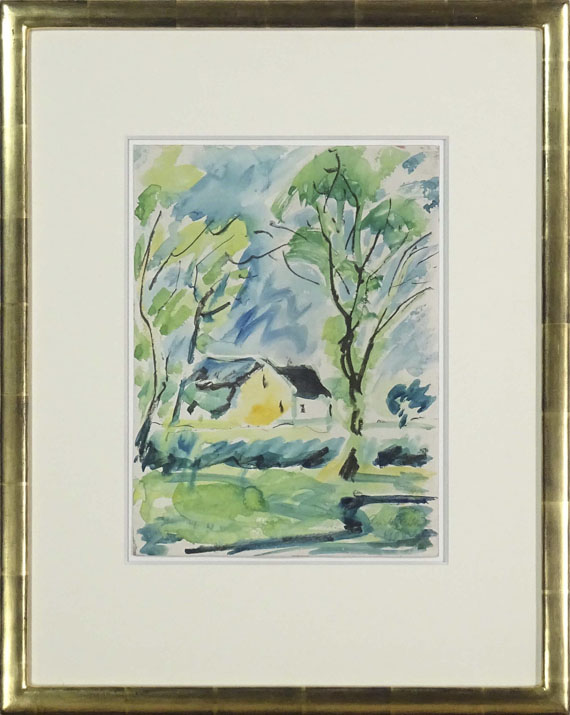 
• One of the most magnificent watercolors by Heckel from the time in Dangast.
• In Dangast the young artist found some of his finest motifs.
• Characterized by a great airiness and transparency.
• Landscape watercolors by the artist from the early days of the "Brücke“are very arre on the international auction market (source: artprice.com).

The work is listed in the Erich Heckel Estate, Hemmenhofen on Lake Constance. We are grateful to Mrs Renate Ebner and Mr Hans Geissler for the kind support in cataloging this lot.

PROVENANCE: Possibly Leipzig, Museum der bildenden Künste (1921-1937. The title the artist wrote on the reverse is identical with the entry in the inventory book at MdbK Leipzig; there is no other sheet with this title in the estate of Erich Heckel).
Possibly state-owned (confiscated from the above in 1937, Degenerate Art no.: 1060).
Possibly Galerie Ferdinand Möller, Berlin (in exchange with the above in 1940).
Galerie Neher, Essen.
Collection Hermann Gerlinger, Würzburg (with teh collector stamp, acquired from the above in 1985).

"This sheet may well be called one of the most astonishing watercolors that Heckel made in Dangast. The painting manner shows a verve nurtured by the boisterously applied colors, an expression of the immediate experience of summer and landscape." Heinz Spielmann, quoted from: Hermann Gerlinger, Katja Schneider (editor), Die Maler der Brücke. Inventory catalog Collection Hermann Gerlinger, Halle (Saale) 2005, p. 159.

The watercolor occupies a special rank in Erich Heckel's work. Until old age, he devoted himself to the painting technique that was important to him, which he picked up early on and constantly developed throughout the different phases of his work. For the young artist in particular, watercolors offered the perfect conditions for achieving the immediacy of expression sought by the "Brücke" artists. Luminous, unmixed colors, which are applied in sweeping brushstrokes and determine the pictorial composition in strong contrasts, are considered to be the special characteristics of these early watercolors. To this day they are impressive evidence of a carefree and impetuous phase in the artist's work, which only gradually changed with the outbreak of the First World War.

The “Gelbe Haus“ (Yellow House) presented here dates from 1908 and was created in Dangast on the North Sea, where some of the “Brücke” artists repeatedly spent the summers. Together with Karl Schmidt-Rottluff and Max Pechstein, Erich Heckel explored the landscape during his stays, partly on foot, but also by bicycle or in small boats. However, the selection of motifs was not always free of conflict, as Max Pechstein later recalled: “On the journey to Oldenburg, Heckel warned me that he was afraid of being crushed by Schmidt-Rottluff. […] So we were staying there, and for weeks we saw a lot of things in the landscape that Schmidt-Rottluff had already depicted and which were a taboo for us.” (Max Pechstein, quoted from: Claus Peukert (ed.), Brücke. Expressionisten in Dangast, Dangast 2002, p. 356). Despite the small competition for the best motifs, the stays in Dangast were an inspiring time for Erich Heckel. In particular, Gerhard Wietek describes the year 1908 as the “most fruitful creative period”, in which “about a hundred apparently effortlessly produced works” were created (Gerhard Wietek, Schmidt-Rottluff. Oldenburger Jahre 1907-1912, Mainz 1995, p. 41). In this watercolor with the small yellow house, which seems to merge with nature between the light green trees and the moving sky, this lightness of the young Heckel can be seen just as much as his sense for the expressive and free use of watercolor paints, which he had developed from early on. [AR]
More Information
+
Sell
Get a free appraisal for a similar object!
+
Register for
Erich Heckel
+
Buying from A-Z
+
Contact a specialist
+
Erich Heckel Biography
Share