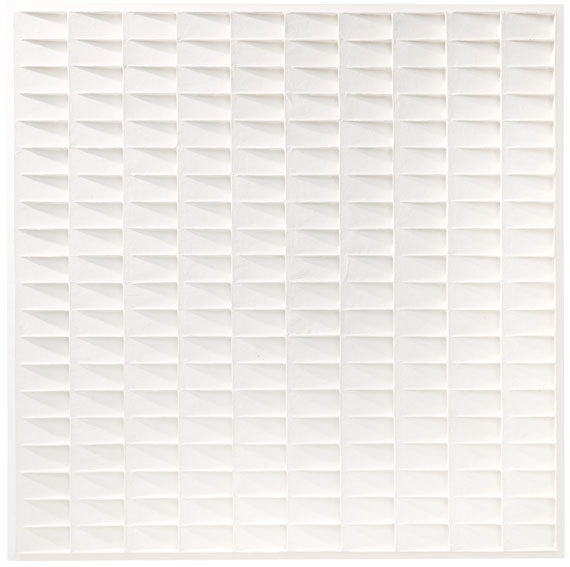 We are grateful to Mr. Antoon Melissen, Amsterdam, for kindly providing us with information. The work will be included into the forthcoming catalogue raisonné.

PROVENANCE: Galerie m, Bochum (directly from the artist).
Private collection Southern Germany (acquired from the above in 1972).

"The square is perhaps the purest of the basic shapes, a kind of frame of reference for all the others."

Schoonhoven's reliefs fascinate with their formal clarity, their artistic radicalism and their technical perfection. As early as in 1972, their unique character was described as "Cool, strictly ordered, well-considered. But also familiar, humane and intimate" (quoted from: A. Melissen, Jan Schoonhoven's silent white revolution, in: J. Schoonhoven, Galerie Zwirner, New York 2015, p. 15). Schoonhoven was a loner who earned a living in the real estate department of the Dutch Post during the day, before devoting himself to highly concentrated work on his reliefs every evening at the dining table of his Delft canal house. Due to the spatial context of their creation, the formats of his reliefs are usually limited to a maximum of a good meter square. In 1956 he created his first monochrome white relief "Motel", although formally based on his highly abstract but still figurative compositions from those years. However, with this work Schoonhoven attained the anti-academic materiality of paper maché that would shape his further creation. Only the following increasing formal reduction towards strictly geometric rows of rectangles or squares - as in "R 70-22" - should become fundamental for the inclusion of the lively play of light and shadow. The basic structure of the square and the rectangle plays a decisive, almost prototypical role in Schoonhoven's work, as the artist sees them as the purest expression of a basic geometric form, which is fundamental for all other geometric forms. "R 70-22" is therefore particularly exemplary of Schoonhoven's work: It is based on the multiplied sequence of the rectangular shape, from the combination of which Schoonhoven developed a large square. In addition, it is fascinating for the rectangles‘ aslant base areas, which stage a particularly accentuated play of light and shadow. Schoonhoven's reliefs are captivating for their formal clarity and visual calmness. Their geometric rigor, which was inspired by architectural structures such as walls, paving stones and lattices, leaves no room for a spontaneous, gestural artistic signature. For Schoonhoven, the actual creative process primarily lies in the conception and the graphic design. As a result, Schoonhoven once again summed up one of the central artistic basic ideas of the Dutch "ZERO" movement, the group "Nul", which Schoonhoven joined in 1958: the forceful negation of the individual artistic signature. Today, Schoonoven's monochrome white masterpiece, like the work of Piero Manzoni, Lucio Fontana, Günther Uecker or Enrico Castellani, are among the most important contributions to European "ZERO" art. [JS]
More Information
+
Sell
Get a free appraisal for a similar object!
+
Register for
Jan Schoonhoven
+
Buying from A-Z
+
Contact a specialist
Share