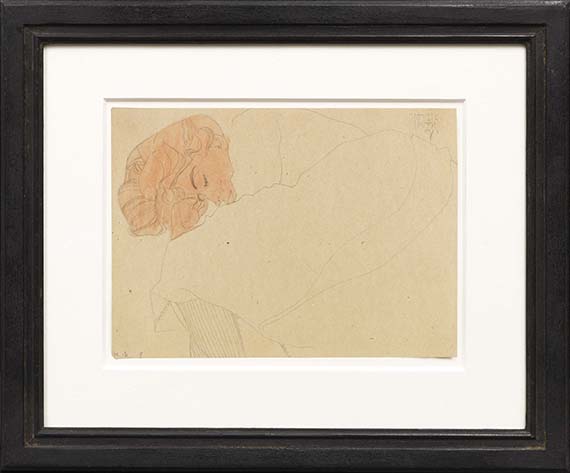 The drawing is characterized by a striking presence. With a few strokes Schiele rendered the face in a view from above, emphasizing the eyebrows, fanning out the lashes of the closed eyelids, sketching ear, nose bridge and mouth, arranging the full hair. Finally, the artist used just a little watercolor for the hair and the face, which comes to rest on the left hand‘s fingers. With sparing lines, Schiele describes the physicality of the woman clad in a dress, sideways lying on a bed – or maybe a couch - her legs drawn up and sleeping. It is more than astonishing how the young artist conveys a calm atmosphere that emanates tenderness, how he manages to do with just a few details, such as the seam of the dress or the stockings‘ riffles, and yet clearly directs the gaze to the sleeping face. What a wonderful scene the young, just 18-year-old Egon Schiele created. How balanced and skillful he spread out the body over the sheet in all its fullness.

In 1906 Schiele, supported by his art teacher Ludwig Karl Strauch, began his studies at the Vienna Academy of Fine Arts. In 1907, the education at the academy became too confining for him, so he literally broke out and sought contact with Gustav Klimt, who was his fatherly friend and mentor. He moved into his first own studio in Kurzbauergasse in Leopoldstadt, not far from Vienna's amusement district Prater. In the following he showed works reminiscent of Gustav Klimt. Klimt was the undisputed star of the Vienna Secession; his decorative Art Nouveau was not only celebrated by the Viennese society. In 1908 Schiele also made the acquaintance of Oskar Kokoschka. It didn‘t take long before he and the slightly older Kokoschka would change painting, above all, the line of the drawing: it became more direct, rougher and charged to the point of a gestural, provocative deformation. Both artists were obsessed with an irrepressible will to create and, as a reaction, transformed Viennese Art Nouveau into an exaggerated Expressionism.
The drawing “Schlafendes Mädchen” (Sleeping Girl) hints at the artist's imminent changes, as he not only staged his model with fine lines, but also expresses his inner feelings. In a speculative attempt, we can try to attribute the sleeping model to his close surroundings. A comparison with other drawings made during this period makes sense, as a clear connection to his older sister Melanie Schiele, who occasionally sat for him, as well as to his mother Marie and to his younger sister Gertrud, can be found.

There is still something left to say about the provenance. The Schiele expert Jane Kallir, who will include this drawing "Schlafendes Mädchen" in her catalog raisonné, deciphered a note written in Sütterlin script on the back: "Besitz Hayd" (Property Haid). Karl Hayd, Austrian painter and graphic artist, attended the Vienna Academy from 1902 to 1906 and moved to Prague for further studies. After his return in 1908, Hayd and Schiele became acquainted and exchanged drawings on several occasions. How the drawing ended up in the estate of Joseph Drexel remains uncertain; according to Kallir, their was no connection between him and Egon Schiele. [MvL]
More Information
+
Sell
Get a free appraisal for a similar object!
+
Register for
Egon Schiele
+
Buying from A-Z
+
Contact a specialist
+
Egon Schiele Biography
Share