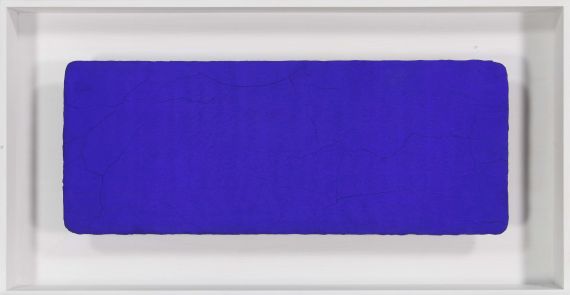 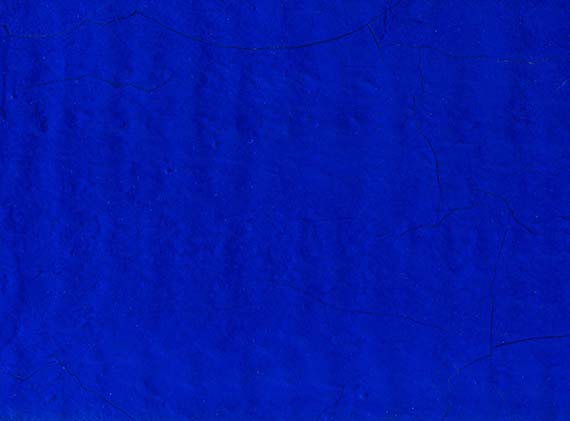 • Part of a German private collection since it was made.
• Unusual landscape format with a strong appeal.
• Presumably made after the seminal exhibition "Le Vide" (The Void) at Galerie Iris Clert in Paris.
• Other "IKB" works from 1958/59 are at, among others, the London Tate Modern, the Fondazione Prada in Milan, the San Francisco Museum of Modern Art (SFMOMA), the Moderna Museet in Stockholm and the Sezon Museum of Modern Art in Karuizawa-machi/Japan.

"At first there is nothing, then there is a profound nothingness, after that a blue profundity.”
Yves Klein, quoted from: Alastair Sooke, Yves Klein. The man who invented a color, BBC Online, August 28, 2014.

"To me the art of painting is about creating freedom. [.] Sensing soul without explaining ., That is what led me to the monochrome. " (Yves Klein, quoted from: Paul Wember, Yves Klein, Cologne 1969, p. 11)
Similar to Lucio Fontana and his "Manifesto Blanco" from 1946, Klein was more concerned with evoking a - possibly spiritual - feeling rather than the expressiveness of painting or its ability to tell stories. The image carrier is completely dematerialized, the viewer does not have to deal with deciphering, but rather immerses in the deep blue, entering an almost meditative state.

In collaboration with a scientist in Paris and certainly also with the knowledge he had gained working for a framer in London in the late 1940s, Klein developed a special material composition of ultramarine blue pigment and a polyvinyl acetate. This compound maintained the pure pigment character – the graininess and the perfect, powdery, matt-blue, yet lively structured surface – despite the fixation on the image carrier. With the help of this self-developed, ingenious technique, the artist also succeeded in creating pictures with a great artistic sensitivity and a noticeable poetic energy in small-format: The "Momochromes bleus", a group to which the work offered here belongs. The final mix ratio was not disclosed. In 1960 the artist applied for a patent for his I.K.B. – International Klein Blue.
Klein showed works with the deep, ultramarine blue for the first time in the important solo exhibition "Proposte monochrome, epoca blu" (monochrome proposal, blue epoch) at Galleria Apollinaire in Milan in 1957. Back then he already mounted the pictures on small wooden bars in order to evoke a certain spatial effect through the distance to the wall. In 1958 – when the work offered here was made – the Paris gallery Iris Clert showed the seminal solo exhibition "Le Vide" (The Void), which would be another climax in an artistic career that lasted only seven years. Owing to his then completely new color experiments and the reinterpretation of the classic concept of painting, Yves Klein is regarded as one of the most innovative artists of the 20th century. [CH]
More Information
+
Bidding Options
+
Bid by telephon / written
+
Contact a specialist
+
Buying from A-Z
+
Preview & Auction Procedure
+
Catalogue Order
+
Register for
Yves Klein
+
Sell
Get a free appraisal for a similar object!
Share 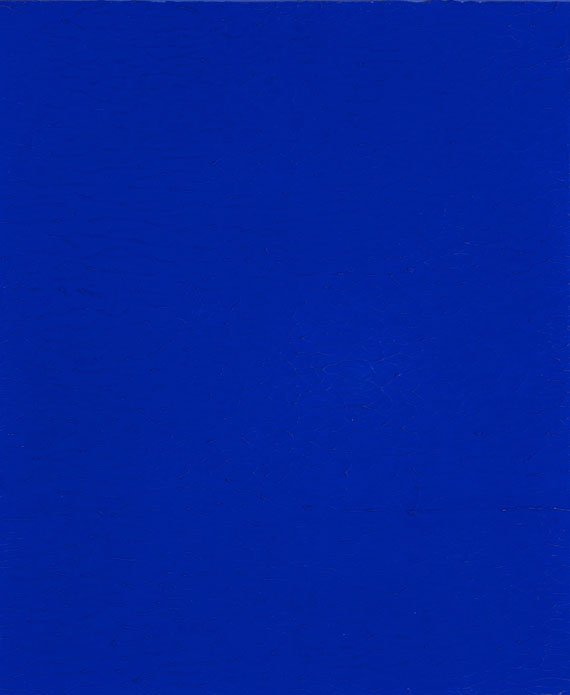 YVES KLEIN
Monochrome bleu (IKB..., 1959
Sold: € 262,500
You might also be interested in
+
and all other offers
Buyer's premium, taxation and resale right apportionment for Yves Klein "Monochrome bleu sans titre"
This lot can be purchased subject to differential or regular taxation.

Resale right apportionment:
In accordance with §26 of German Copyright Act, a droit de suite charge of 2.4% including VAT is levied for original artworks and photographs for the compensation of the statutory right of resale.
Yves Klein - lots sold by Ketterer Kunst
+
all