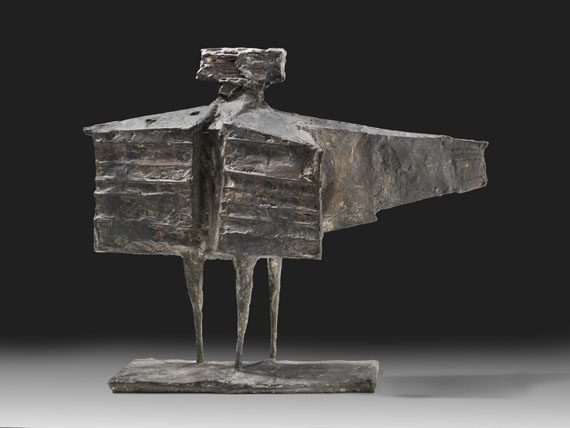 We are grateful to Dr. Sarah Marchant for her kind support in cataloging this lot.

LITERATURE: Dennis Farr and Éva Chadwick, Lynn Chadwick. Sculptur, With a Complete Illustrated Catalogue (1947-2005), Aldershot 2006, p. 166, cat. no. 321 (with black-and-white illu.).
"It seems to me that art must be the manifestation of some vital force coming from the dark, caught by the imagination and transformed by the artist's ability and skill into painting, poetry, sometimes music. But whatever the final shape, the force behind it is, as the man said of peace, indivisible."
Lynn Chadwick, 1953, quote from: www.pangolinlondon.com

Today Lynn Chadwick is considered one of the most important sculptors of his generation. Although he did not begin to work as sculptor before the late 1940s, his unwavering artistic endeavors brought him great successes from an early point on. He was chosen, along with Kenneth Armitage, William Turnbull, Eduardo Paolozzi and other artists, to represent Great Britain at the Venice Biennial as early as in 1952. The exhibition "New Aspects of British Sculpture" was instantly met with great international recognition. In 1956 - contrary to general expectations – it was not Alberto Giacometti who received the International Sculpting Award at the 28th Venice Biennia but Chadwick. In 2001 he became a member of the Royal Academy of Arts. In 2003 the London Tate Britain honored him with a grand retrospective exhibition. Today Chadwick's works can be admired in a number of renowned museums, among them the Museum of Modern Art and the Metropolitan Museum in New York, the Tate Gallery, London, and the Center Georges Pompidou, Paris. Unlike the often chiseled and modeled works of his famous predecessors Barbara Hepworth or Henry Moore, the artist creates his works in an additive process. His earliest sculptures consist of welded metal rods and metal or slate plates and, for their delicacy and mobility, call reminiscence of mobiles or the works of Alexander Calder. Works made as of the early 1950s consist of a welded framework of iron rods which Chadwick filled with a concrete compound and put them on thin, lanky legs. With this idiosyncratic creative process, the artist starts in abstraction and attains figuration through the consecutive work steps. In the second half of the 1950s, these forms began to solidify and Chadwick found his very own, characteristic style, with which he primarily examined the physical presence of the human body in single or multi-figure compositions. The present "Maquette for R34" is one of Chadwick's early bronzes and a smaller version of the monumental bronze "Stranger III" (1959), which was part of Documenta II in Kassel the year it was made. It testifies to Chadwick's characteristic formal reduction of reality and his unwavering quest for the perfect balance between movement and stability. Both his monumental and smaller bronzes underline that nuanced hints at posture and body language convey a much greater liveliness than fully executed facial features and limbs - especially in connection with the magnificently carved, uneven surface texture. The bronze offered here visualizes the unique style of an artist with an oeuvre that covers almost 50 years and that has had lasting impact on British post-war sculpting art. [CH]
More Information
+
Sell
Get a free appraisal for a similar object!
+
Register for
Lynn Chadwick
+
Buying from A-Z
+
Contact a specialist
+
Lynn Chadwick Biography
Share