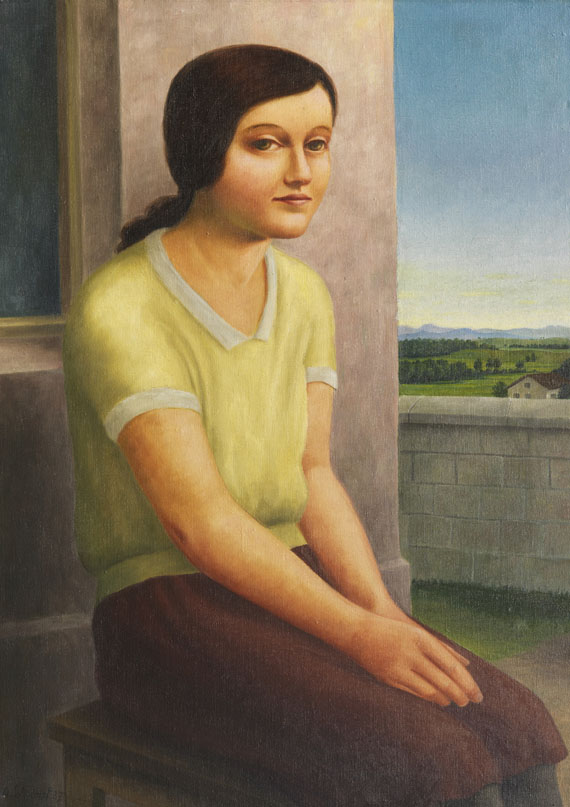 • Characteristic composition by one of the lading representatives of New Objectivity in museum quality.
• The mysterious figure compositions with melancholic young women are among the most sought-after works from Schrimpf's small oeuvre of paintings.
• Part of the 1929 exhibition of the Deutscher Künstlerbund.
• Similar paintings are in the collections of Nationalgalerie Berlin, Kunsthalle Mannheim and the Lenbachhaus, Munich.

Essay
The oeuvre of the early deceased Georg Schrimpf, who was one of the outstanding representatives of New Objectivity, is small and exquisite. It is the art of the period between the war that owes its name to the exhibition "Die Neue Sachlichkeit. Deutsche Malerei seit dem Expressionismus" (The New Objectivity. German Painting Since Expressionism), which was on display at the Kunsthalle Mannheim in 1925. In addition to works by Georg Schrimpf, the selection also included works by George Grosz, Otto Dix, Alexander Kanoldt, Carlo Mense and Karl Hubbuch. In a letter to Franz Roh from December 1924 Schrimpf wrote: "What is Mense up to? Can't we do an exhibition on "Sachlichkeit "? Kanoldt would very much like to." (Quote from: Georg Schrimpf und Maria Uhden, Berlin 1985, p. 134.). Schrimpf's still lifes with rubber trees and cacti are beautiful. His deserted landscapes are clear and vast, they combine a romantic delimitation with an objectivity reminiscent of Hopper. His most popular works, however, are his figure paintings, of which almost all show young women in pensive, melancholy postures. With their odd calm they quickly cast a spell on the observer. What makes these works so special is the de-individualized type of woman that he depicts, their almond-shaped eyes, the severely parted hair and their always somewhat stout physicality. Schrimpf's love for the artist Maria Uhden, his first wife, can certainly be seen as the reason for this unique type of woman, because "[s] she was tall and, despite her twenty-two years already quite womanly, a little corpulent, had a clear, good face and beautiful dark, speaking eyes. "(OM Graf, quote from: G. Schrimpf und M. Uhden, Berlin 1985, p. 200). In 1918 the young artist died of childbed fever after the birth of their son. In order to cope with the tragedy Schrimpf began to make depictions of Maria with the child in medieval tradition, which promoted a further typification of his figure pictures. Sitzendes Mädchen" is one of these wonderful paintings that has everything characteristic of Schrimpf's New Objectivity painting: the self immersed melancholic female figure, the reduced interior, the warm, subdued colors and the renaissance-like view of the vast landscape. Schrimpf died in Berlin in 1938 at the age of forty-nine. His obituary read: "Schrimpf's name has gone down in the history of modern painting as that of the founder of 'New Objectivity' [..]" (C. Hohoff, quote from: ibid., p. 2). To this day Schrimpf is regarded as an outstanding representative of New Objectivity. The important collection of the Lenbachhaus in Munich includes works by Christian Schad and Rudolf Schlichter, as well as seven paintings by Georg Schrimpf. [JS]
More Information
+
Sell
Would you like to sell a similar object?
+
Register for
Georg Schrimpf
+
Preview & Auction Procedure
+
Bidding Options
+
Bid by telephon / written
+
Buying from A-Z
+
Catalogue Order
+
Contact a specialist
+
Georg Schrimpf Biography
Share 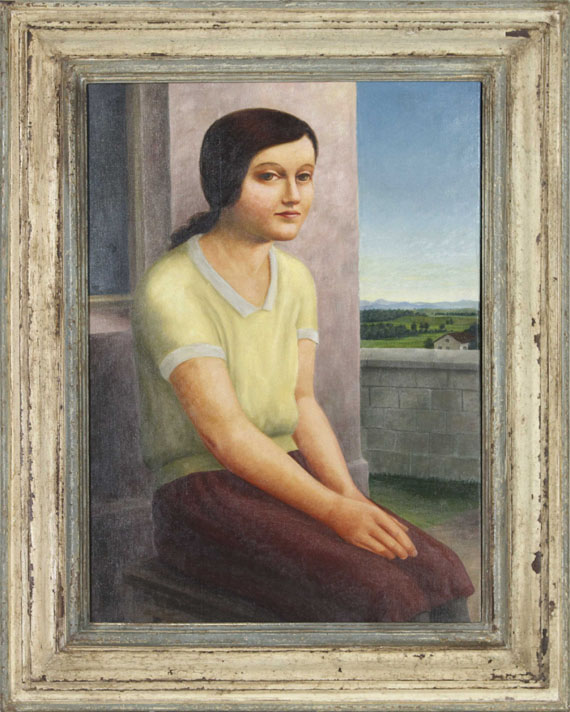 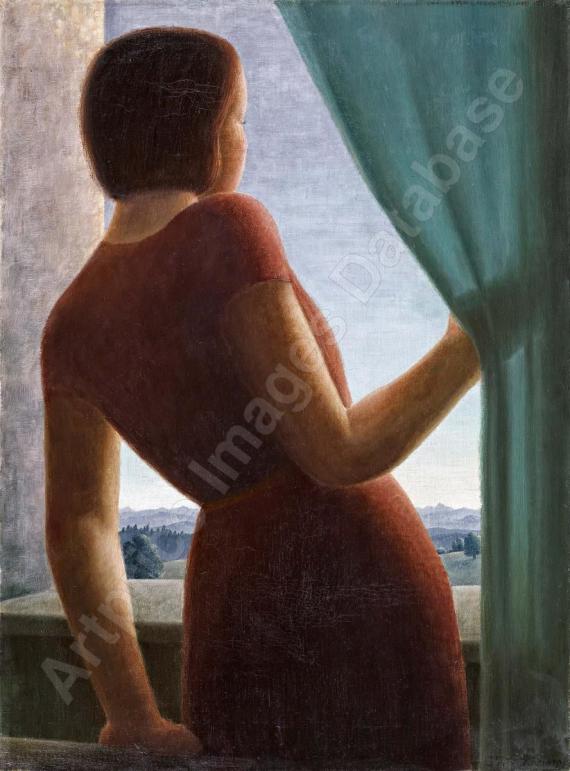 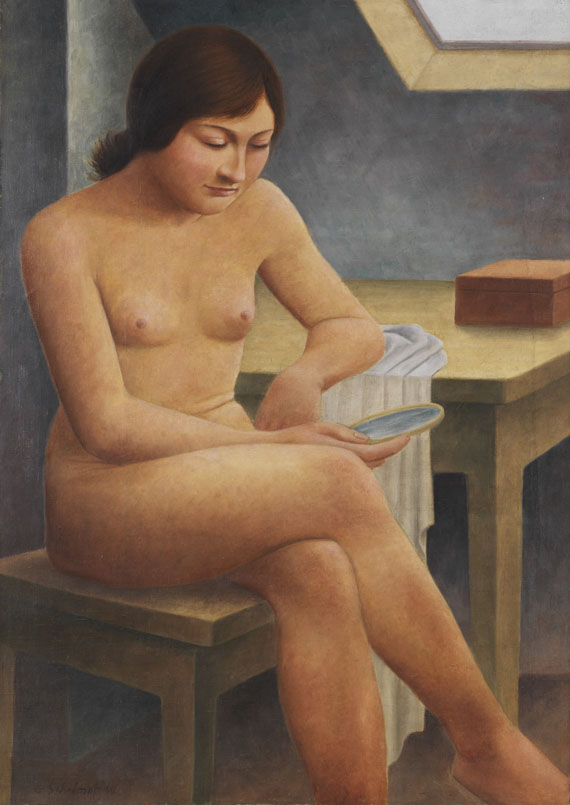 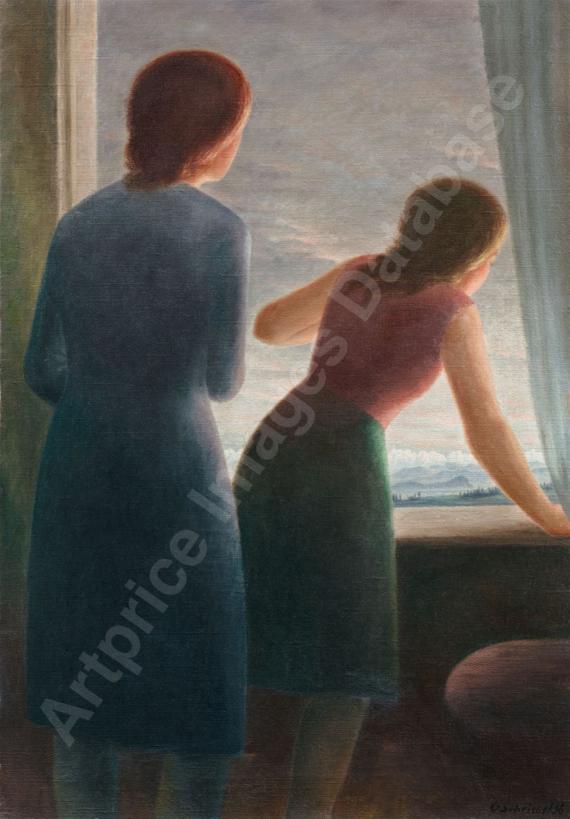 GEORG SCHRIMPF
Am Morgen (1936)
Sold: € 198,400
You might also be interested in
+
and all other offers
Buyer's premium, taxation and resale right apportionment for Georg Schrimpf "Sitzendes Mädchen"
This lot can be subjected to differential taxation plus a 7% import tax levy (saving approx. 5 % compared to regular taxation) or regular taxation.