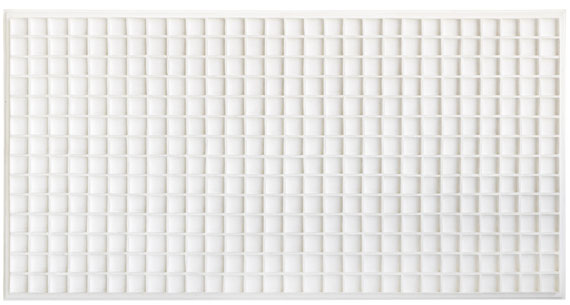 • Of utmost rarity.
• To date no relief of this size has ever been offered on the international auction market.
• Other large early reliefs are owned by museums, among them the Museum Boijmans van Beuningen, Rotterdam, and the 'Stiftung Kunst im Landesbesitz Nordrhein-Westfalen', Düsseldorf.
• Smaller reliefs are in many important international collections like the Museum of Modern Art, New York and Tate Modern, London.
• In 2014/15 Schoonhoven's work was part of the grand ZERO shows at Solomon R. Guggenheim Museum, New York, and the Martin Gropius Bau, Berlin.

We are grateful to Mr Antoon Melissen, Amsterdam, for his kind expert advice. The work will be included into the forthcoming catalog raisonné.

PROVENANCE: From an important European private collection (acquired from the artist).

"The square is perhaps the purest of the basic shapes, a kind of frame of reference for all the others."
Jan Schoonhoven, 1972, quote from: Jan Schoonhoven, Delftse meester, De Telegraaf, January 12, 1972.

Schoonhoven's reliefs fascinate with their formal clarity, their artistic radicalism and their technical perfection. In the catalog for the Schoonhoven exhibition in Mönchengladbach in 1972 , their unique character was described as "Cool, strictly ordered, well-considered. But also familiar, humane and intimate" (quote from: A. Melissen, Jan Schoonhoven`s silent white revolution , in: J. Schoonhoven, Galerie Zwirner, New York 2015, p. 15). Schoonhoven was a loner and of extremely slim stature who did a little creative day job in the real estate department of the Dutch Post, before devoting himself to working on his reliefs every evening at the dining table in his Delft home since the end of the 1950s. Due to the spatial context of their creation, the formats of his reliefs are usually limited to a maximum of around a meter by a meter. Large formats like "R-71-18" are an absolute rarity in Schoonhoven's work.

In 1956 he created his first monochrome white relief with "Motel", which was formally still based on his highly abstract but still figurative compositions from those years. Here, however, Schonnhoven had already found the anti-academic materiality of the paper maché, which would shaped his further creation. However, only the increasing formal reduction towards strictly geometrical rows of rectangles or squares - as in "R 71-18" - should be of fundamental significance for the integration of the lively play of light and shadow over following years. Following the first Dutch exhibition by the Italian Piero Manzoni, who is also internationally known for his white relief paintings, Schoonhoven was one of the Dutch co-founders of the "ZERO" movement in 1958. It was only in the years that followed that Schoonhovens reliefs found their characteristic formal rigidity, for which architectural structures such as walls, pavement stones and lattices provided key inspiration.
"R 71-18" - The square as a basic geometric form

The basic structure of the square plays a decisive, almost prototypical role in Schoonoven's work, as the artist ascribes the purest expression of a basic geometric shape to the square, which is fundamental for all other geometric shapes. The large-format relief "R71-18" is therefore a very special example of Schoonhoven's work: It is based on the multiple sequence of the square as a basic geometric shape, from the combination of which Schoonhoven developed a large rectangle. For this purpose Schoonhoven placed 14 rows with 28 squares each below one another and thus designed an impressive three-dimensional relief landscape of 392 squares in same size, which is particularly captivating for its formal clarity and visual calm. Even in formal terms, the strict geometric structure of his reliefs does not offer any space for a spontaneous, gestural artistic signature. In addition, Schoonhoven soon hired assistants that helped him with the execution of his reliefs, since he regarded the conception of the work in form of drafts and drawings as the actual creative artistic process. As a result, Schoonhoven once again put one of the central artistic ideas of the Dutch "ZERO" group "Nul" in a nutshell: the consequent negation of an individual artistic signature. In a film portrait from 1972 Schoonhoven is shown working on one of his reliefs, and he described the creative process as follows: "It's purely technical, what I'm doing here, nothing but pure handiwork. The artistry, the artistic, has naturally already occurred when I made the design. A lot of thoughts went into that design, preceded by a process of drawing, and this is the final result. Everything is calculated, everything is evaluated. " (quote from: ibid., p. 39).

Jan Schoonhoven, whose monochrome white main work, as well as the work of Piero Manzoni, Lucio Fontana, Günther Uecker and Enrico Castellani, is one of the most important contributions to European ZERO art, left behind a total of around 800 reliefs. Most of them, however, are small-formats while only a total of about five works were made in a format comparable to that of "R 71-18". Our work "R 71-18" is therefore an absolute rarity in Schoonhoven's oeuvre and we are very delighted about the opportunity to offer a major large format by the celebrated Dutch "ZERO" artist on the international auction market for the very first time. [JS]
More Information
+
Sell
Would you like to sell a similar object?
+
Register for
Jan Schoonhoven
+
Buying from A-Z
+
Contact a specialist
Share 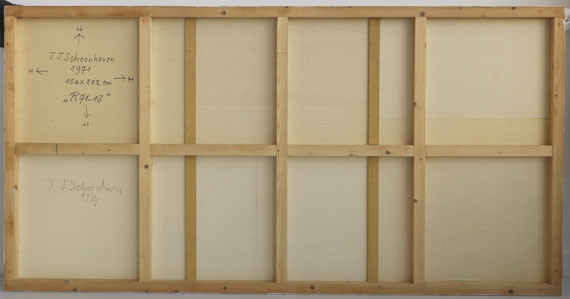 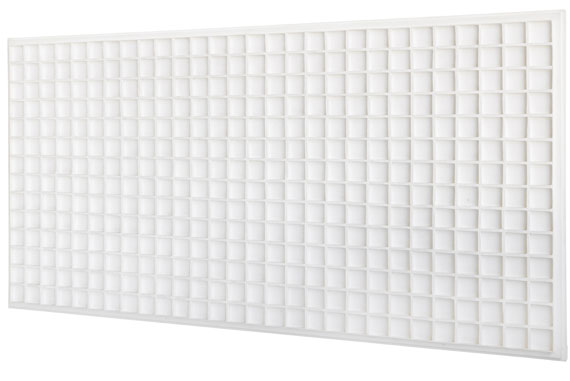 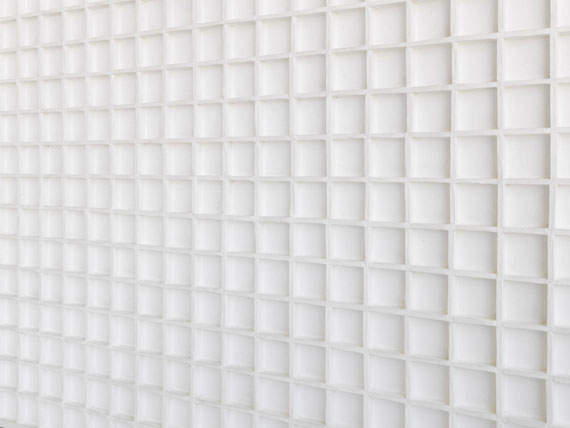 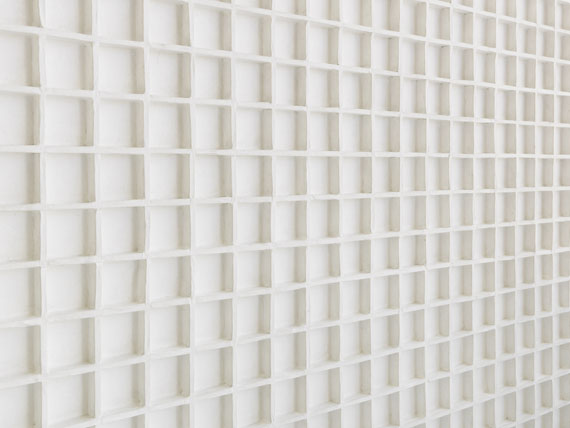 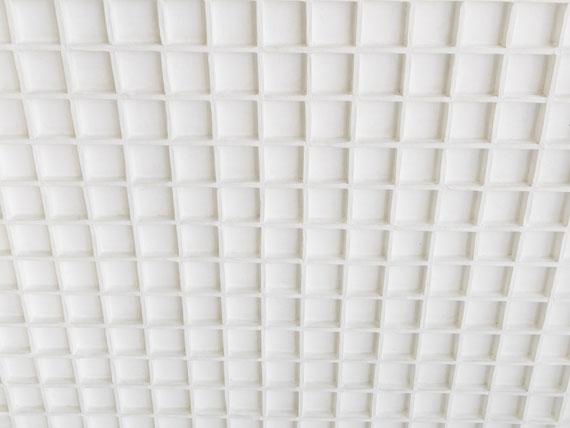 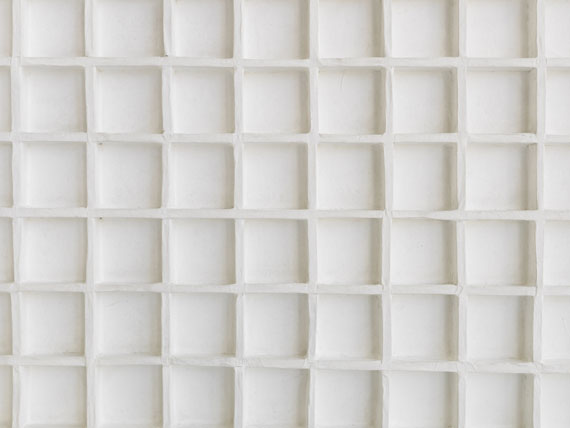 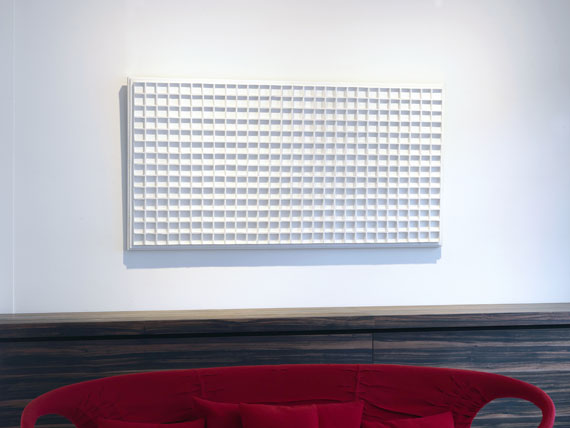 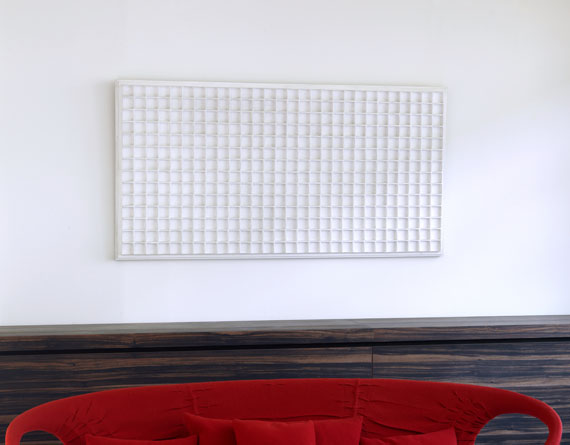