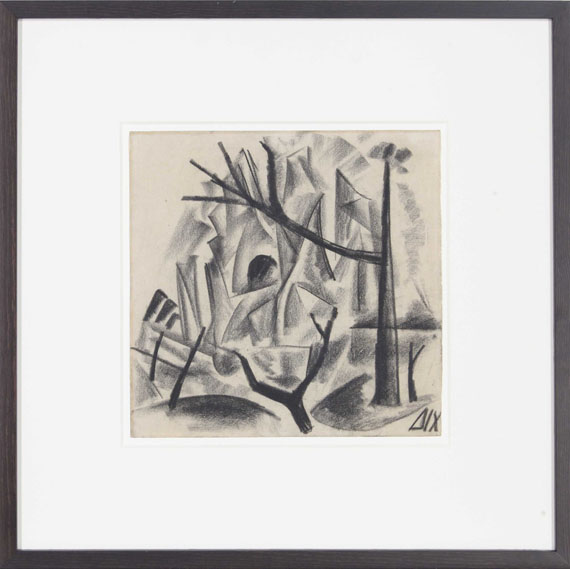 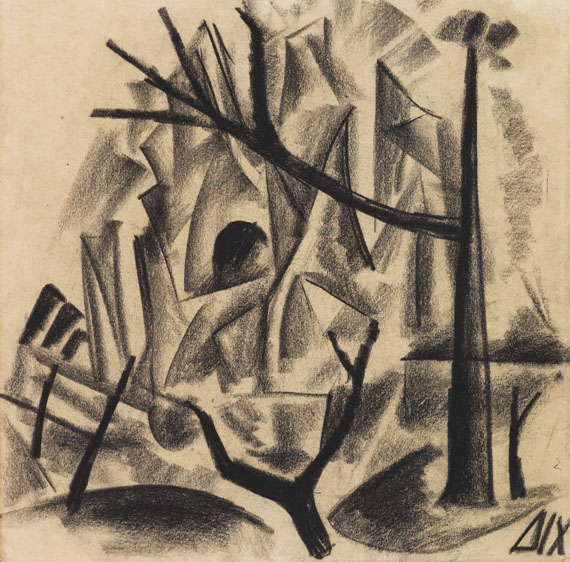 • Through fragmentation, abstraction and alienation of this coarse, almost threatening, village scene, Dix processed his war experiences , which had shaken him to the core.
• Similar drawings by the artist are at the Museum of Modern Art in New York ("Zerschossene Mauern", 1916 / "Schreibender Soldat", 1916).
• The high-contrast, expressionist war drawings form an impressive first peak in the artist's early creative period.

The work is registered in the archive of the Otto-Dix-Foudnation with the number Lorenz WK 5.5.19.

"Dix must have experienced the war like a dream, but with the watchful eyes of a draftsman and painter. [.] Dix not only sees war as an effect of a man-made technology, but experiences it as a brutal, callous eruption of nature beyond good and evil: as storm flood and typhoon, as a tremor that shakes earth in its foundations. He experiences in apocalyptic or eschatological [.], that is the ultimate and the utmost, as doomsday mood, as inhuman and superhuman, as something what has long slipped away from man. Man can only duck before this violence: he can only suffer through it. But what a pandemoniac drama it unfolds before his frightened and amazed eyes! "
Otto Conzelmann, Otto Dix. Handzeichnungen, Hanover 1968, pp. 17f.