• Outstanding example of Schlemmer's quest for the ideal symbiosis of figure and space.
• "Bauhaustreppe" (Museum of Modern Art, New York), presumably Schlemmer's most famous work, was made the same year.
• Characteristic, fascinating and pointed contrast of light and dark.
• Evocation of a "metaphysical" spatial atmosphere through the poised composition of partly strong and partly glazing watercolors and a partly blank background.
• Family-owned for more than 50 years.
• The human head in profile view is characteristic of Oskar Schlemmer's style - it was also used for the Bauhaus signet which Schlemmer designed in 1922.

LITERATURE: Hans Hildebrandt, Oskar Schlemmer, Munich 1952, cat. no. 739.
"I'm often told my 'people' don't have 'face's, if at all 'puppet faces'. What they don't understand is that this is fully intentional and not possible otherwise. Before we can paint the 'face' we have to explore the type, the impersonal." (Quite from: ex. cat. Oskar Schlemmer, Folkwang Museum, Essen 1970/71, p. 20)

Essay
"A unique role in the Bauhaus community". Oskar Schlemmer's work in Weimar and Dessau
Oskar Schlemmer is considered one of the most influential and most versatile artists of the Bauhaus. In 1960 Walter Gropius judged Oskar Schlemmer in retrospect: "Schlemmer played a unique role in the Bauhaus community." (Quote from: Karin v. Maur, Oskar Schlemmer. Monograph, Munich 1982, p. 187). During his time in Weimar (1921-1925) and Dessau (1925-1929) Schlemmer worked not only as a painter and graphic artist, but also as sculptor, set designer, interior designer and choreographer. He initially headed the mural painting workshop, then the metal workshop and the wood and stone carving workshop. With the relocation to Dessau, Schlemmer also took over the management of the Bauhaus stage and from 1928 on he taught the class "Der Mensch" (Man). In the endeavors for a holistically educated society and the cross-genre connection of craft and artistic creativity, his impressive oeuvre unites the spirit and ideals of the Bauhaus, which would shape the design and the entire artistic development of the first half of the 20th century.

Man and space. Ideal and utopia
Due to his aspirations for a stronger union of art and architecture, Schlemmer's artistic projects increasingly explored questions regarding space in form of sculptures and wall reliefs after he had been appointed to teach at the Weimar Bauhaus in the 1920s. Schlemmer's extremely varied work now revolved almost exclusively around the representation of the human head and body. In his paintings, works on paper, wall paintings, sculptures, costume designs, choreographies and stage plays, he put man at the center of his experimental work and made human beings the "measure of all things". In his works the artist searched for his very own ideal type of a human physiognomy; a search that was certainly also influenced by the enthusiasm for sports and the body cult trending in the 1920s. His experimental spirit culminated in the productions of the "Triadic Ballet" (premiered in 1922) for which he also designed the costumes and which today is considered a milestone in dance theater. The idealized symbolic figure on the stage soon evolved into an integral part of his iconography. In 1928 Schlemmer was commissioned to design a circular room at the Folkwang Museum in Essen. Perhaps that was one of the reasons why he was particularly intensively occupied with the representation of the male body and its movements until 1931. By renouncing individual characteristics Schlemmer developed strongly stylized, harmoniously composed figure studies with strictly aligned vertical and horizontal axes based on a geometrical body language. With a few exceptions, the artist integrated the figurines, conceived as a symbiosis of cones, cylinders and spheres, in a surreal environment or in undefined, abstract spatial architectures in which the interior plays only a subordinate role, if any at all. The artist himself explained: "On a surface which is the equivalent of a cosmic space I can classify the figures in a way that they appear as visible functional forces of cosmic life [..]. It is often objected that my 'people' have no real faces, if at all, they have the faces of dolls. Unfortunately, one does not understand that this is absolutely intentional and that anything else would be impossible. " (Quote from: ex. cat. Oskar Schlemmer, Folkwang Museum, Essen 1970/71, p. 20). In 1933, in the course of the defamation of Oskar Schlemmer, the Folkwang cycle was removed from the walls of the museum - the panels are now considered lost, while the drafts and the preparatory drawings and watercolors have been preserved.
The artist at the height of his career
At the time our work was created Oskar Schlemmer was at the height of his artistic career. In 1930 his works were part of the XVII. Venice Biennial. In 1931 the Flechtheim Gallery in Berlin devoted a solo exhibition to him, which was later also shown in Zurich and Krefeld. The same year his art was presented to an international audience in the grand overview exhibition "Modern German Painting and Sculpture" at the Museum of Modern Art in New York. At the same time, however, the overall political situation in Germany and Europe worsened and ended in an unprecedented tragedy. The artist also increasingly suffered repressions after the National Socialists had come into power. Weimar - Dessau - Wroclaw - Berlin. Schlemmer's domains in the early 1930s
After Walter Gropius had resigned Schlemmer left the Bauhaus and in 1929 began to teach at the Breslau Academy of Arts and Crafts. There he led, among others, the class of stage art, taught the subject of "Mensch und Raum" (Man and Space) and made stage designs for theater and opera productions. However, due to strict austerity measures as a result of the global economic crisis, the Breslau Academy was closed in 1932 and Schlemmer was appointed to the State School for Applied Arts in Berlin. This post, however, he was deproved of this post without prior notice by the National Socialists in 1933. The artist found himself exposed to ever increasing defamation, his works were now defamed as "degenerate" and were removed from museums and exhibitions, for example from the retrospective show at the Stuttgarter Kunstverein in 1933. With their geometric design language based on mathematical rules, Schlemmer's works of these years certainly also reflected a general social and, last but not least, personal mood, which may also express a longing for order, for unity and community.
"I want to create types of people and not portraits, and I want the essence of space and not interiors", explains the artist with reference to his inapproachable figures in at times completely abstract environments (quote from: ex. Cat. Oskar Schlemmer, Staatsgalerie Stuttgart / Württembergischer Kunstverein, Stuttgart 1977, p. 9). With the almost three-dimensional physicality of the young man's figure, the so characteristic, strict depiction in profile and the atmospheric light effect evoked through the strong light-dark contrast, the watercolor offered here, which was made in the important year 1932, can be seen as a leitmotif in Oskar Schlemmer's oeuvre. At the height of his painterly creation “Jünglingsfigur romantisch" is a work that reflects the essence of the almost geometric design language Schlemmer had developed at the Bauhaus. It is a document of his quest for decisive order and a manifesto against the chasm and chaos of his time, an artistic call to stand against political radicalization and social misery: "We need number, measure and law as armor and armament in order not to be engulfed by chaos" (Oskar Schlemmer, quote from: ibid., p. 11). In its simultaneity of figuration and abstraction, of pause and motion, of the exactness of the drawing and the almost mystical-nebulous light effect, of schematization and free, dynamic creation, the watercolor is both a characteristic document of Oskar Schlemmer’s distinctive creation in particular, and of the seminal German art around 1930 in general. [CH]
More Information
+
Sell
Would you like to sell a similar object?
+
Register for
Oskar Schlemmer
+
Buying from A-Z
+
Contact a specialist
+
Oskar Schlemmer Biography
Share 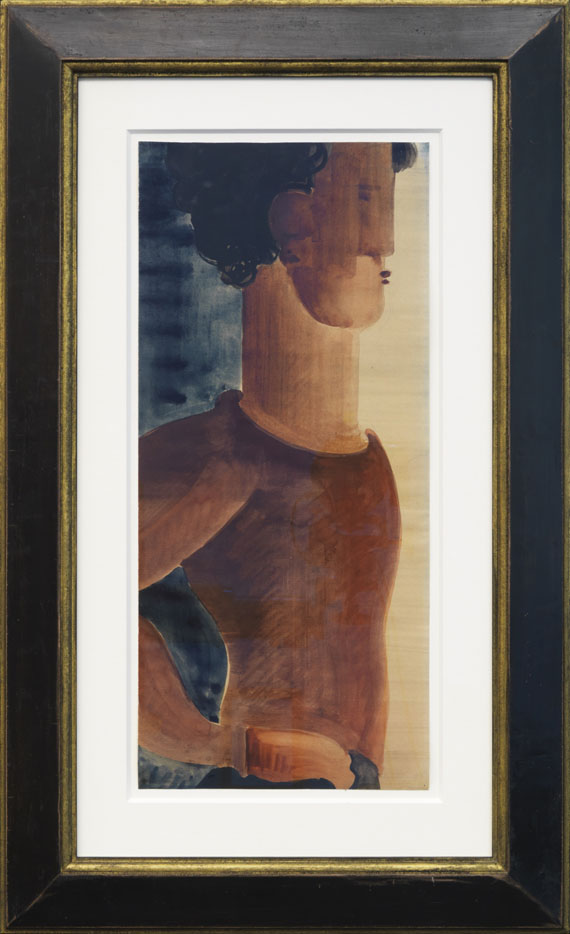