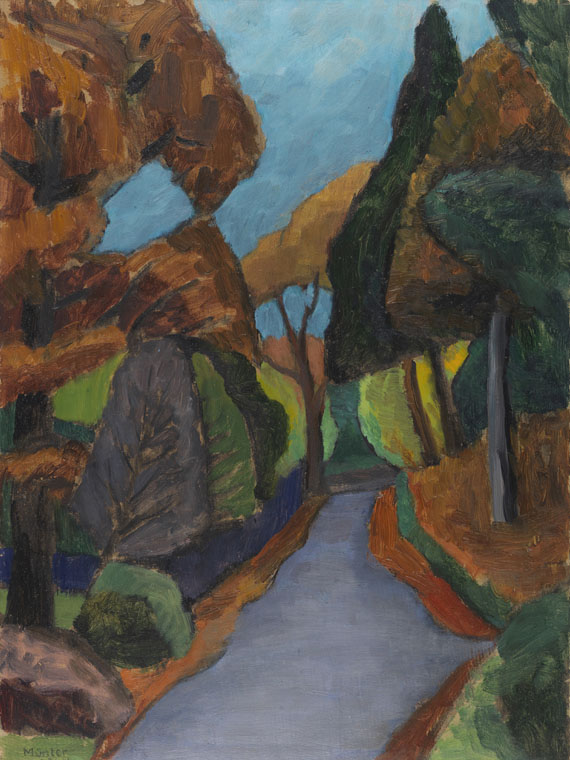 Accompanied by a written expertise issued by the Gabriele Münter- and Johannes Eichner-Foundation, Munich, from November 2, 2020. The work will be included into the catalog raisonné of paintings.

Essay
Landscape and nature are Gabriele Münter’s preferred theme. Her views of the "Blue Land" with the mountains and the seasonal views of the Staffelsee are well known. With great diversity, she captured the rich coloring of the changing seasons, which is particularly spectacular in the pre-Alpine landscape around Murnau, in her pictures. Whether its the pure winter light, the soft colors of an early spring, the rich and strong summer hues or the autumn’s color blaze. Münter worked a lot plein-air, something she became acquainted with and learned to appreciate in the class of her future partner Kandinsky at the Phalanx painting school. First sketches were often created in front of nature and fully executed in oil. This is also the case with our painting "Herbstallee", as Münter recorded in her journal, according to which Gabriele Münter made the oil painting on December 5, 1931. It also mentions that this almost abstract painting was painted after study 72 and that Gabriele Münter found the motif in her direct surroundings down by the lake. Few of her landscapes show such a narrow image section without any wider scope than it is the case with our "Herbstallee". The bright and colorful trees condense into an almost abstract two-dimensional color pattern, while the interlocked bushes and trees form a dense pattern. This must have been the only way for Münter to work out the autumn colors in such a tremendous clarity. [EH]
More Information
+
Sell
Would you like to sell a similar object?
+
Register for
Gabriele Münter
+
Buying from A-Z
+
Contact a specialist
+
Gabriele Münter Biography
Share 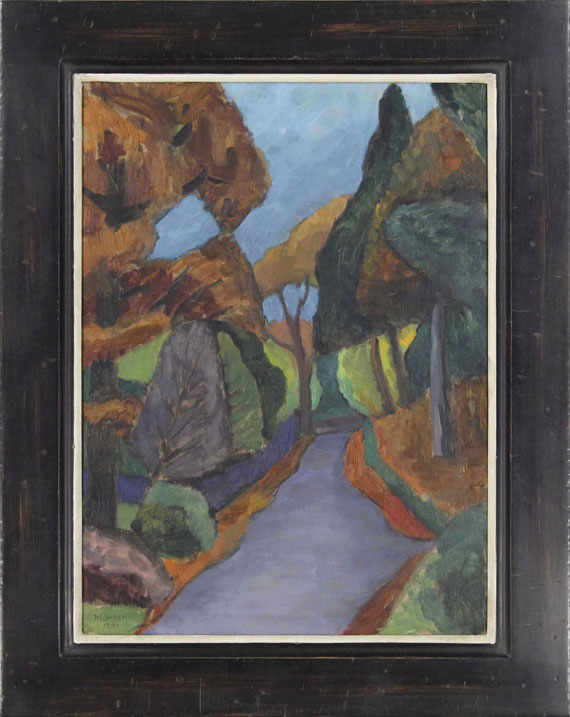