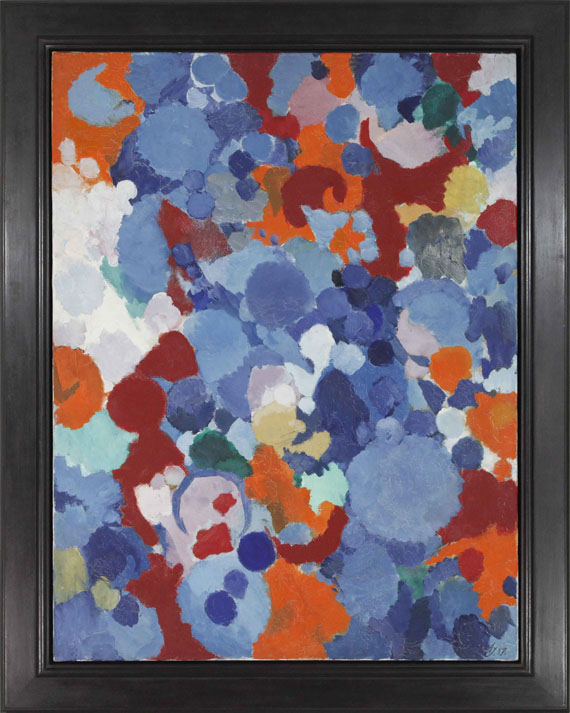 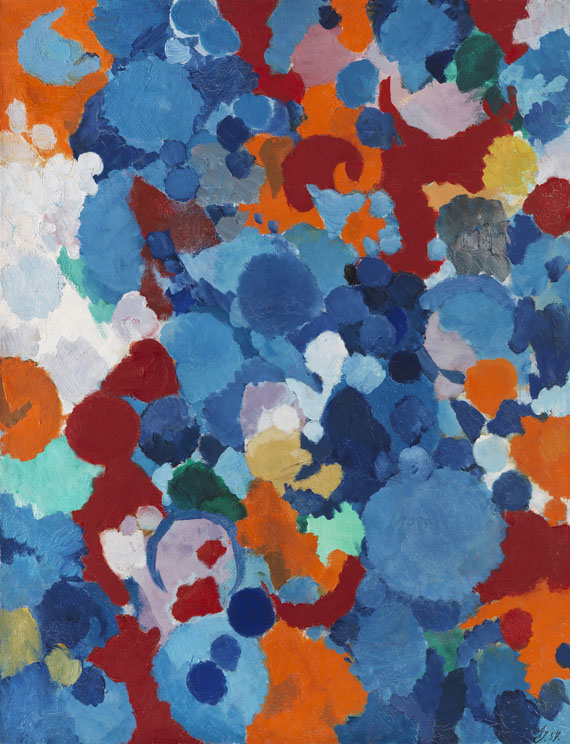 • Work of museum quality in particularly harmonious colors, from the important series of the "Scheibenbilder" (‘Disc Pictures‘, 1954-1962).
• Part of the grand retrospective shown at Kunstverein Düsseldorf in 1959.
• Notable provenances, part of the Collection Deutsche Bank AG, Frankfurt a. M. for nearly 40 years
• The year the work was made E. W. Nay participated in the exhibition "German Art of the Twentieth Century" at Museum of Modern Art in New York.
• Other works from this period are at, among others, the Museum Folkwang in Essen (1957), the Bavarian State Painting Collections, Munich (1956), the Nationalgalerie, Berlin (1957), the Kunsthalle Hamburg (1958) and the Kunsthalle Bremen (1957).

"A sensual art, a powerful art, an art that is an expression of life, emanating a universal sensation that is a new definition of religion, a wordly transcendence. This art is my art [..]."
E. W. Nay, quote after: ex. cat. Nay - Variationen. Retrospektive zum 100. Geburtstag, Kunsthalle der Hypo-Kulturstiftung, Munich 2002, p. 20.

A "stroll through the color circle"
After the "Rhythmic Pictures" at the beginning of the 1950s, E. W. Nay devoted himself intensively to the "Disc Pictures" between 1954 until the early 1960s. This work offered here is part of this work complex. These works are regarded as a documentation of a successful new direction in his art, as well as a manifestation of his great sovereignty in handling color, technique and material. In the introductory text of the catalog raisonné of oil paintings Siegfried Gohr, then director of the Ludwig Museum in Cologne, compares this creative period with a "stroll through the color circle" (Cologne 1990, p. 21). In a by that time unequaled chromatic freedom, Nay combined circular and semicircular shapes to form the most varied, but always harmonious, color modulations.

Allowing the color to speak for itself
In this work from 1957 offered here, Nay uses the power of the primary colors red and blue and thus creates both a light-dark and a warm-cold contrast that structures the entire picture. The color is not forced into a certain form stipulated by art-historical models, formal rules or artistic schemes – instead it is expressed in freely set circles, semicircles and surfaces in varying sizes and in skillfully chosen positions, allowing it to entirely speak for itself. In a composition rarely so joyful and colorful, Nay combines an abundance of different colors that he shaped into rounded or mostly round surfaces, so that after closer inspection the observer can still discover more and hitherto unperceived color nuances. Although warm, dark red, bright, strong orange and a variation of blue tones dominate, white and gray, turquoise and dark green, delicate and richer rosé, lilac-colored violet and sandy, light yellow can also be found.

The disc as an involuntary circular movement
Nay attained the motif of the disc during the process of artistic creation, because for him "the natural spread of a color in the process of painting is the circle [..]. Trying to enlarge the first dab of paint on the canvas, his hand quite involuntarily sets the brush into circular motion "(Elisabeth Nay-Scheibler, Scheibenbilder 1954-1962, in: Ernst Wilhelm Nay. Scheibenbilder, Galerie Thomas, May 21-4, 2010, Munich 2010, p. 11). Nay initially combined the discs with graphic design elements, it was not until 1955 that he broke away from all angular and edgy shapes for the rest of this period of creation, thus making the disc sole motif. "The color circle and the disc evoke memories of numerous concepts of the world and symbols that both artists and philosophers have been preoccupied with for centuries. The circle of colors virtually contains all the stages of life and has the power to evoke space. Nay knows about these connections and uses them for his very unliterary analogy of the picture as a world model that the artist designs for himself and his time." (S. Gohr, in: Catalog raisonné of oil paintings, p. 21). The discs, however, are not lifeless forms within a geometric pictorial order. They are by no means rigid, but lively and full of restlessness, they create a rhythm and extend far beyond their decorative function.

E. W. Nay at the peak of his career
Works from the 1950s were created at a peak in E. W. Nay's artistic career. In 1955 the Kleeman Galleries in New York showed the first solo exhibition of his work. A year later he took part in the Venice Biennial. In 1955 and 1959 (as well as in 1964) he exhibited his works at the Documenta in Kassel and had his international breakthrough. Since then, Ernst Wilhem Nay's work has been part of numerous acclaimed national and international exhibitions and is part of renowned public and private collections. This work offered here became part of the important Collection Deutsche Bank in the 1980s after exhibitions at the Galerie Franke in Munich, which was so crucial for the artist's career, and in the retrospective at the Düsseldorf Kunstverein and the Kunsthalle Basel. [CH]
More Information
+
Sell
Get a free appraisal for a similar object!
+
Register for
Ernst Wilhelm Nay
+
Buying from A-Z
+
Contact a specialist
+
Ernst Wilhelm Nay Biography
Share