PROVENANCE: From the artist's estate.
Galerie Wilbrand, Cologne (verso of the stretcher with a gallery label).
Private collection North Rhine-Westphalia (acquired from aforementioned in 1978).

Essay
The "Porträt Dame mit Hut" (Lady with Hat) is mentioned as "Porträt der Mutter mit Hut" (Mother with Hat) in the first catalog raisonne by J. Heusinger v. Waldegg. It was made while Davringhausen was still a student at the Düsseldorf Art Academy, where he enrolled in late 1913. Since he became dissatisfied with the education offered there soon he left the academy together with August Macke, Heinrich Nauen and several other artists as early as in summer 1914. Along with H. M. Davringhausen, these artis’s count among the most important representatives of Rhenish Expressionism. Next to Berlin and Munich the Rhineland was one of creative centers in those days, a hub for new art tendencies and the avant-garde. The year this work was made was of crucial importance for the development of the young artist: In May that year he showed his works at Alfred Flechtheim’s Düsseldorf gallery – his first exhibition ever. Flechtheim was one of the first art market promoters of Rhenisch Expressionism, which absorbed influences from Cubism, Futurism and the Expressionism of the ”Blauer Reiter", as the gaudy portrait offered here delivers impressive proof of. The elegant hat’s dynamic form is frequently reflected in the puzzle-like representation. The contours blur, body and background are decomposed to individual forms that seem to superimpose one another in futurist manner. An extremely dynamic and rhythmic composition in Davringhausen’s characteristic attractive aesthetics is the result.
More Information
+
Sell
Would you like to sell a similar object?
+
Register for
Heinrich Maria Davringhausen
+
Buying from A-Z
+
Contact a specialist
+
Heinrich Maria Davringhausen Biography
Share 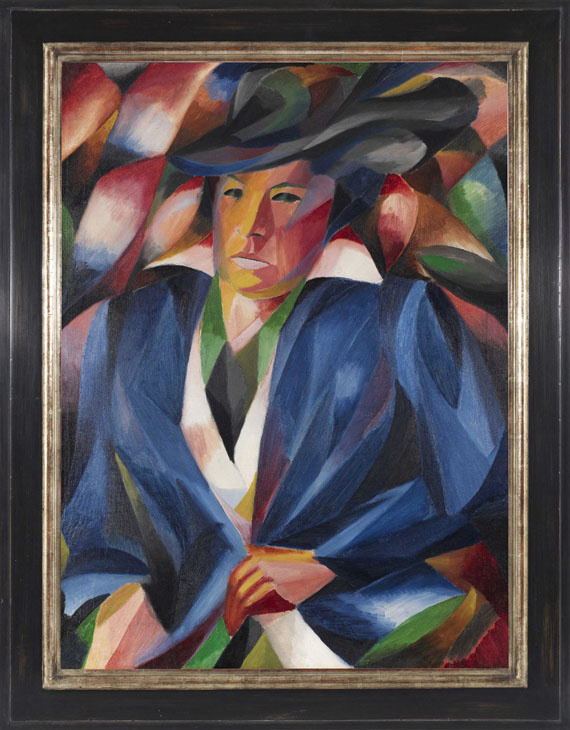