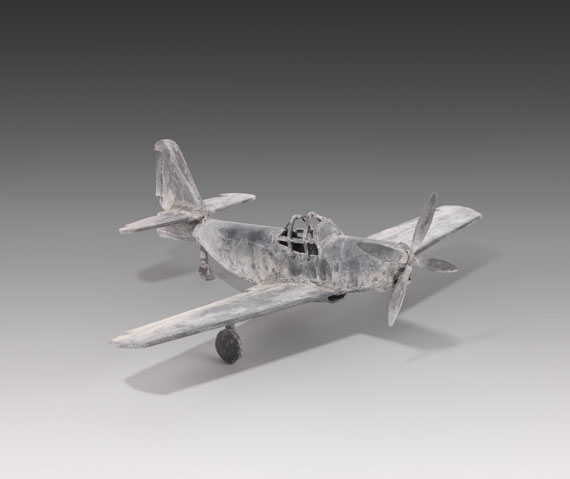 Our airplane sculpture "Die Argonauten" is a characteristic example of Kiefer's occupation with the "Jason" myth - both with regards to content and form. In an interview from 1990 the artist expresses his messages: "What the apples meant to Cézanne, that's the story of the argonauts to me." (SZ magazine, no. 46, November 16, 1990, p. 27). Kiefer analogized the airplane, another leitmotif in his artistic creation, with the "Argo", the mystical ship on which Jason and the Argonauts sailed to retrieve the Golden Fleece, in his early cycle "Himmelspaläste" from between 1988 and 1991. The sculpture offered here is such an "Argo-Plane". The fighter jet coveys the legend's battlesome symbolism while a critical-romantic undertone sounds: The material lead makes the vehicle unable to fly and the Golden Fleece remains object of an unsatisfied desire. [JS]
More Information
+
Sell
Get a free appraisal for a similar object!
+
Register for
Anselm Kiefer
+
Buying from A-Z
+
Contact a specialist
+
Anselm Kiefer Biography
Share