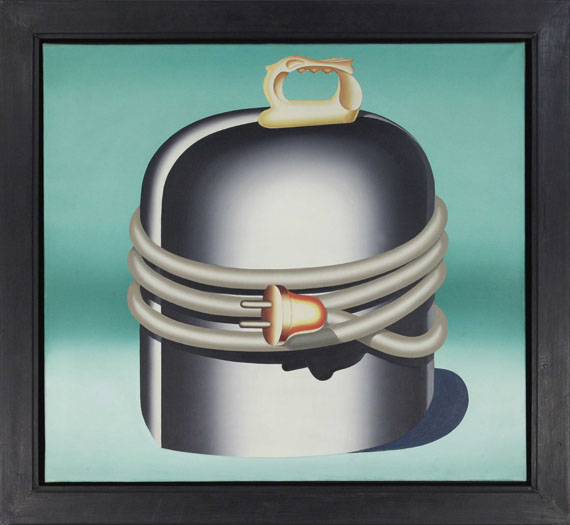 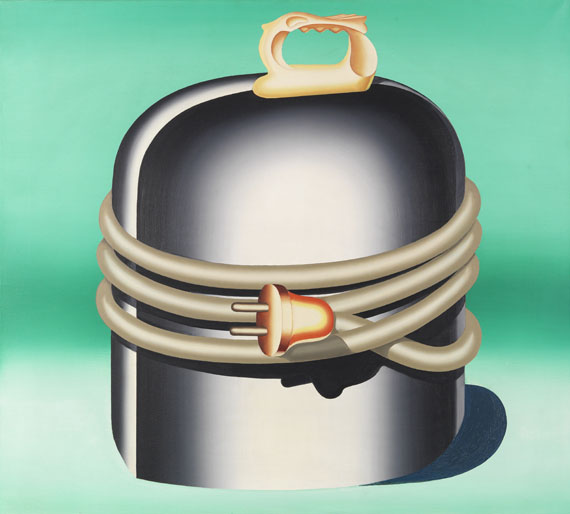 "As far as the difference between the Photo-Realists [..] and him [Klapheck] is concerned, it is the decided transformation between object and image, the high level of abstraction that takes his objects from their natural environment and thus - despite everything else - provides their distance from reality, their fetish character and emblematic stilyzation. All of this means that Klapheck's pictures can't be mistaken for what others do nor for what they represent."
Werner Schmalenbach, 1976 (quote from: Konrad Klapheck. Objekte zwischen Fetisch und Libido, Basel, Galerie Beyeler 1976, no page)

Konrad Klapheck's overall artistic leitmotif and art-historically unique feature is the machine. He began with his typewriter pictures in the mid 1950s, initially rendered close to reality, he took to an alienation of the motif through monumentalization, isolation and close-up depictions of details. Additionally, he gave his works interpretive titles like "Der Chef" (Kunstmuseum Düsseldorf) or "Der Diktator" (Museum Ludwig, Cologne). At the same time Konrad Klapheck became occupied with everyday objects such as sewing machines, irons, telephones, kettles and other kinds of household machines. To Klapheck painting has always been an artistic way of coping with his past, his way of handling childhood memories and transfering them to the present. The early work "Der Chefideologe" (Chief Ideologist) is a particularly fine example thereof, as the hyper-realistic painting manner, the non-contextual presentation of the object and the pictorial mergence of several common machines lead to an increased degree of alienation that captures the observer right on the spot. One tends to try to unscramble the artistic "rebus", a strange symbiosis of kettle and iron, which Klapheck confronts us with in all his creative mastery. And just as Klapheck's humanizing titles clearly show, his machine pictures, an entirely new subject in the history of European art, are always a picture of man, too. In review, Klapheck summed up: "During the first couple of years when I was entirely focussed on technology, on the machine, on the small technical items found in offices and households, I was sometimes asked, especially by older people like my mother's friends or my mother-in law: "Well, you have got such charming kids, don't you want to portray them? And why don't you paint people at all?" And I would always think: But man is at the core of my work, that is the central theme! But I am employing the instruments that people use. Man has created self-portraits ever since the days of the Stone Age, from the the first stone wedge to today's computers. Man is mirrored in all the objects that he has created." (Konrad Klapheck, 2002, quote from: Klapheck. Bilder und Texte, Munich 2013, p. 114). [JS]
More Information
+
Sell
Get a free appraisal for a similar object!
+
Register for
Konrad Klapheck
+
Buying from A-Z
+
Contact a specialist
+
Konrad Klapheck Biography
Share