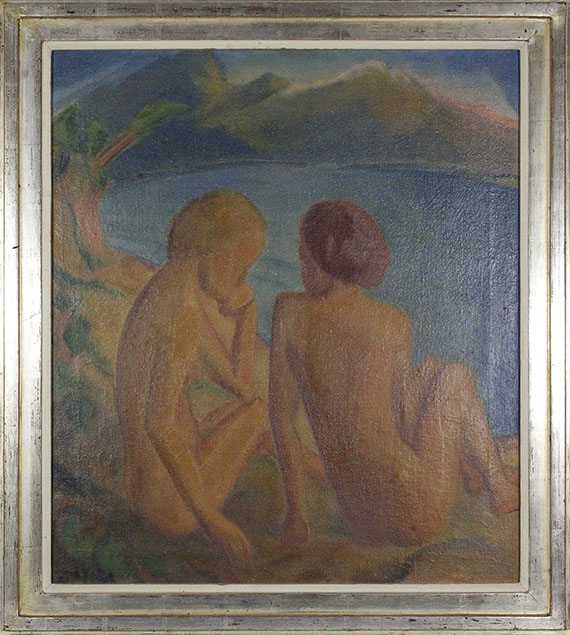 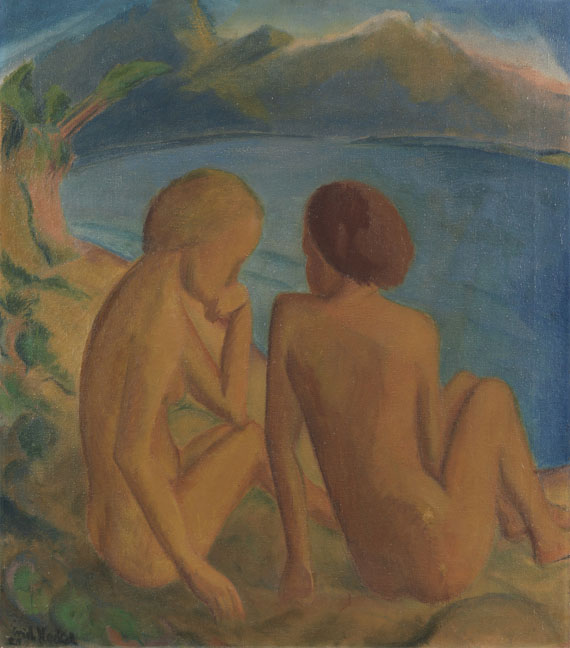 "..right after the war the bathers returned to Heckel' s repertoire of motifs. As far as the colors are concerned, it becomes obvious how much the figures blend in with the background and the palette of the landscape elements. The bathing people are perfectly integrated into nature, become a part of it, there is nothing menacing to be observed any longer .." (cf. Janina Dahlmanns, Erich Heckel, in: Im Zentrum des Expressionismus. Erwerbungen und Ausstellungen des Brücke-Museums Berlin 1988-2013, Munich 2013, p. 289)

There is hardly any other motif than the bathers that is so characteristic of the expressionistic creation of the "Brücke" artists. Heckel, who spent most summers at the Flensburg Firth, was as intensively occupied with the theme of the nude in nature as Otto Mueller. The artists of Expressionism valued the theme so much because of its nativeness. Just as it was the case with most of his painter colleagues, Erich Heckel used the years after World War I to work the theme out, attaining an expressive Realism that would determine his pictorial accomplishments in the following. The two ladies sitting on the beach, a well-known motif in the creation of Heckel and the expressionists in general, are now seen from a more pictorial perspective, just as the landscape that unfolds its panorama view in gentle streaks in front of the two nudes. What is new is the contemplative element, which particularly strong in our work. An intimate togetherness in symbiosis with nature. This idea, which inspired the art of Heckel and his painter colleagues from the days at the Moritzburg Lakes, is revived. Similar to Otto Mueller, who depicted the relatedness of man and nature in many his works, Erich Heckel was able to work out a freedom that he made beneficial artistic use of. [KD/JS]
More Information
+
Sell
Get a free appraisal for a similar object!
+
Register for
Erich Heckel
+
Buying from A-Z
+
Contact a specialist
+
Erich Heckel Biography
Share